a not-so-new regime of interpretation

I imagine that most college professors in the humanities in their thirties, forties or fifties were trained under critical theory. It was drilled into us whether we liked it or not, and we are therefore probably not at risk of forgetting it. The mode of furrow-browed critique towards works of art and literature will, I expect, always come naturally, even if we prefer (as I do) to fuel our prophetic stirrings more with Amos than Agamben. But it is increasingly difficult to ignore the fact that the dark night of suspicion is giving way to some kind of dawn. In The Limits of Critique (University of Chicago Press, 2015), Rita Felski explains: 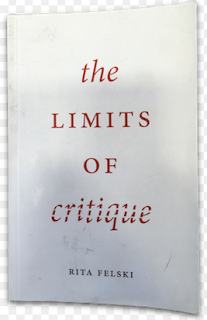 My conviction - one that is shared by a growing number of scholars - is that questioning critique is not a shrug of defeat or a hapless capitulation to conservative forces. Rather, it is motivated by a desire to articulate a positive vision for humanistic thought in the face of growing skepticism about its value. Such a vision is sorely needed if we are to make a more compelling case for why the arts and humanities are needed. Reassessing critique, in this light, is not an abandonment of social or ethical commitments but a realization, as Ien Ang puts it, that these commitments require us to communicate with intellectual strangers who do not share our assumptions. And here, a persuasive defense of the humanities is hindered rather than helped by an ethos of critique that encourages scholars to pride themselves on their vanguard role and to equate serious thought with a reflex negativity. Citing the waves of demystification in the history of recent thought (linguistic, historicist, etc.) Yves Citton notes that they share a common conviction: the naïvety of any belief that works of art might inspire new forms of life. We are seeing, he suggests, the emergence of another regime of interpretation: one that is willing to recognize the potential of literature and art to create new imaginaries rather than just to denounce mystifying illusions. The language of attachment, passion, and inspiration is lo longer taboo (187).

Felski cites Michael Billig, Luc Boltanski, Jane Bennet and James Elkins as further allies in this shift. Especially helpful is Michel Chaouli's questioning the measures we take to keep the power of works of art at bay.  "How curious it is," he remarks, "that we dig wide moats - of history, ideology, formal analysis - and erect thick conceptual walls lest we be touched by what, in truth, lures us [in works of art]."  Lest we think this means we should look with dewy-eyed infatuation at any manner of artistic expression, Felski elaborates,


That critique has made certain things possible is not in doubt. What is also increasingly evident, however, is that it has sidelined other intellectual, aesthetic, and political possibilities - ones that are just as vital to the flourishing of new fields of knowledge as older ones... (190).

The antidote to suspicion is thus not a repudiation of theory - asking why literature [and art] matters will always embroil us in sustained reflection - but an ampler and more diverse range of theoretical vocabularies. And here, the term "postcritical" acknowledges its reliance on a prior tradition of thought, while conveying that there is more to intellectual life than the endless deflationary work of "digging down" or "standing back." Rather than engaging in a critique of critique, it is more interested in testing out alternative ways of reading and thinking. What it values in works of art is not just their power to estrange and disorient but also their ability to recontextualize what we know and to reorient and refresh perception. It seeks, in short, to strengthen rather than diminish its object - less in a spirit of reverence than in one of generosity and unabashed curiosity (181-182).

But a shift as major as this one is going to need some heavy theoretical cover, and Actor-Network-Theory serves this role for Felski. If you need it to get to where she finds herself, have at it. Treating works of art as non-human actors may be a helpful experiment, but not necessarily a new one. (After all, it has long been common for Wheaton students to refer to their Bibles as the living Word.) That said, perhaps this alliance will only buy us ten years or so, until Actor-Network-Theory (already under considerable fire) itself succumbs to a new regime. That is why theology strikes me (unsurprisingly) as the more field-tested warranting discourse for the post-critical moment, something that art historian Tom Crow (see his No Idols: The Missing Theology of Art) most certainly understands. 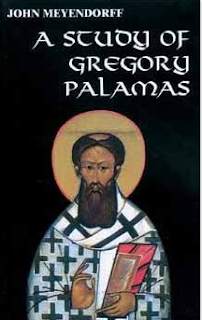 Does a turn to theology mean that works of art will be any less pulsingly vibrant? Not in the least. Decades before Bynum showed how "Christian materiality" is far different (and more fundamentally paradoxical) than recent Object Oriented Ontology trends, John Meyendorff used the same terms to describe the kind of faith that Gregory of Palamas (1296-c.1359) defended:


We find here the elements of Christian materialism, which, instead of wishing to suppress matter which has revolted against the spirit through the effect of sin, gives it the place the Creator assigned to it, and discovers the way which Christ opened for it [matter!] by transfiguring it and by deifying it in his own body.

That Christian materiality is the ultimate warrant for interpreting works of art is old news at this old blog (15 years and counting), but as literary theory comes around to something resembling it, the warrant bears repeating. In these post-critical times, venerable figures like Wheaton English professor Clyde Kilby (see his posthumousy published The Arts & the Christian Imagination), don't look so countrified after all. Fortunately, for a school that has taken faith seriously as a backdrop for studying the humanities, Felski's wonderful book is not the dawning of a new regime as much as permission (even vindication) for what we've been doing all along.

And so, Professor Felski: Thanks!
Posted by millinerd at 3:33 PM