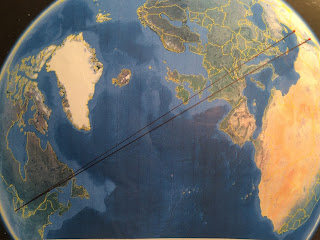 The following are abbreviated remarks I gave at an interfaith panel today organized at the Islamic Center of Wheaton in the wake of a nasty cyber-attack (my Wheaton colleague Noah Toly's remarks are here).

I teach the history of art & architecture at Wheaton, and I think architecture might help us understand the differences and similarities between Muslims and Christians in our town. I am speaking of the architecture of this building, the Islamic Center of Wheaton. One of the first things I learned when coming here last October was that the original Assembly of God congregation who built this structure wanted it to be facing Jerusalem, the definitive place for Christians due to our belief that Jerusalem is where the death and resurrection of Jesus occurred. But when this building became a mosque, major alterations were not required as Mecca, the definitive place for Muslims, is in the same general direction as Jerusalem. Our faiths are centered in different definitive places, and those differences matter. But if we both seek to look to the definitive places of our faith – to be better Christians or Muslims respectively - we will both be looking in the same preliminary direction.

One example of this was brought to my attention by Dr. Adam Wood, who teaches philosophy at Wheaton. He pointed out that Wheaton College’s recent alumnus of the year, William Lane Craig, began his celebrated career with a book entitled “The Kalām Cosmological argument" (compressed into a 4 minute video here). Kalām is Arabic for “speech,” and Craig entitled his book this way because he learned the argument from the Ilm al-Kalām tradition of Islamic philosophy. Interestingly, the Islamic tradition first borrowed it from a Christian thinker, John Philoponus. Muslims then expanded and refined the argument, after which it was borrowed again from Muslims by William Lane Craig. In the book Craig therefore says that Western Christian theologians “achieve a credit for originality that they do not fully deserve, since they inherited these arguments from Arabic theologians and philosophers whom we tend unfortunately to neglect.”

Perhaps this helps illustrate the same preliminary direction of our faiths (the joined red lines above), even if when we keep pursuing that direction, we arrive at different definitive places. Jerusalem and Mecca are hundred of miles apart, both geographically and theologically, and never has anyone in this mosque expected me to be anything but straightforward about that separation. That said, if the Islamic tradition can help a Wheaton Christian philosopher do his job of proclaiming God to the modern world, then perhaps the Islamic Center of Wheaton can help Christian residents of Wheaton do that same job as well.

Thank you (yet again) for your extraordinary hospitality.
Posted by millinerd at 6:38 PM