What I am telling my Wheaton Art students on Monday

Who says you can't teach art history when in full controversy mode? 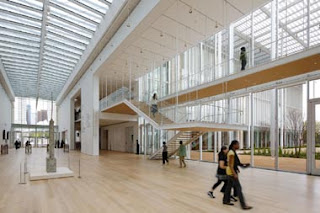 The life-size photograph of a topless woman straddling a motorcycle is intended to critique the acquisitive male gaze, but I look away. I find an earlier critic of lustful eyes to be significantly more compelling than the canonized contemporary artist Richard Prince. And I don’t think the twelve-year old boy who keeps slipping back for a furtive look, or the families that seem puzzled by the Art Institute’s new contemporary gallery, have fully fathomed Prince’s critical intention. The new galleries are filled with such raw images, and most of the names are expected (Koons, Gober, Fischl, Weiwei).  It’s not uninteresting, and I will try to give such artists a fair hearing in this class - approaching them on their own terms. But if I’m honest, I am still uncomfortable with much of the art donated for the edgy new display.

Within a half hour, though, I am far more at ease, amid people who would likely share my discomfort. Specifically, I am with 15,000 Muslims at the Chicago convention center just down Lake Shore Drive from the Art Institute. I am there because of an invitation I received from the Islamic Center of Wheaton. In the wake of the current controversy, they wanted to bring some Wheaton professors along to join in the interfaith portion of the weekend. I meet a colleague and we hear from the leading Islamic scholar, Tariq Ramadan.  He tells us “We want Christians to be Christian. Show us how your faith has changed your life.” Well, that we can do.

Wheaton College has an official relationship with the Art Institute – a very positive one. You get free admission with your student ID, and we’re doing a tour soon and I hope you can come. Does that mean we endorse all the images in the contemporary gallery? Of course not. In the same way, Islam in almost all its forms is perfectly at odds with our faith statement, which I sign with conviction. More importantly, every Sunday I recite the Nicene Creed, proclaiming the truth that Jesus was “begotten not made, of One Substance with the Father.” Conversely, the Koran says “He begot none, nor was He begotten” (112:3). But the fact that these statements are irreconcilable does not preclude charitable and realistic engagement with Muslims. For me, it is what makes engagement possible. Without the love of Jesus Christ which came to me through the evangelical tradition, I would either be minding my own business and fearful of my Muslim neighbors, or (more likely) ill-educated enough to think the differences are no big deal, justifying lived indifference. 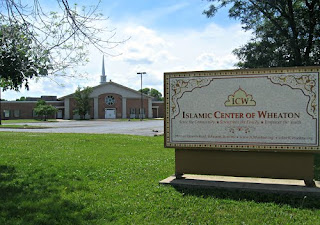 You’re at a small liberal arts college, which means you are taking a contemporary art course with a Byzantine art historian. In my field work in Turkey, Egypt and Cyprus I had some negative and some very positive contacts with Muslims, and spent lots of mornings waking to the prayer call of the minaret. But interestingly, the best relationships with Muslims I have had have been in this town. Believe it or not, they (and by “they” I mean real local people like Abraham and Zahra) are well aware that despite this media firestorm, Wheaton College is here for the long haul, and so are they. Accordingly, my son is not even one year old, and he has been held by more Muslims than Christians. The reason for this is that at the Islamic Center of Wheaton, the gracious, hijab-donning women joyfully pass him around while I talk theology with my new friends. From the beginning we have been clear about our differences. I actually believe, for example, you could have passed Allah (the pre-Islamic Arabic term for God which is still used by Arabic-speaking Christians) around in the same way as my son. And sentimental as it may sound, because God freely gave his son, I can freely give mine.

It’s strange that even while this controversy has caused so much grief and suffering, you will likely benefit from it, because you will study harder and learn more than you would have otherwise. I count Professor Hawkins a friend and I value her as a colleague, and I do not know what is happening. There is a dramatic contrast between media reports and the principled interfaith conversations that were happening in Wheaton long before all of this began. If it turns out (God grant it) that reconciliation with the administration is in the future, then we will have reason to rejoice. Perhaps principled protest will be required – I don’t know yet. Your and my civil bearing and Christian charity could have a role in bringing the best out of this situation. Please keep praying for that, and remind me to as well. Jesus was fully God and fully human at the same time. With his help (and with Muslim neighbors like ours) it is possible to be fully truthful and fully loving at the same time as well.

So buckle up, and let’s learn some art history. This could be the best semester of your life.
Posted by millinerd at 6:06 PM