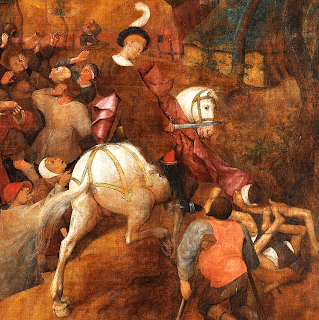 Millinerd is almost 10 years old (update: 19 years old!).  It's all very exciting and I'm trying to take it in stride, even though it is an absolutely massive deal.  I mean some people started blogs and migrated to Beliefnet, Patheos, or who knows else where?  Some started newsletters or substacks. But despite countless offers (countless because there were none), I stayed put. My (and your!) reward is the internet equivalent of localism. I never left for the big city. I stuck to my hometown address. And even while the strip malls of Tumblr, Twitter and Facebook Meta drain the old-growth economy, millinerd is still here. Sometimes you wanna go where everybody knows your Internet Protocal address.

One millinerd tradition has been an attempt to reclaim - make that claim - Thanksgiving as Jeudi Gras (Fat Thursday). For the real details of the holiday head to my colleague Tracy McKenzie's new book (with video to boot). But I prefer to co-opt the day liturgically. Advent, which starts soon, is a fast season, and because in the Christian economy, fasts draw their meaning from feasts (and vice versa), one always has to feast before a fast, making Thanksgiving Mardi Gras without the beads (which would be weird with family around anyway).

But as Jeudi Gras is not catching on (the downside of internet smallville), let me pursue this further.  Advent used to actually be as long as Lent, and the pre-fast indulgence when that was the case took place on the feast day of Saint Martin of Tours (November 11th). His is a sainthood to savor. You can find him depicted in Chartres Cathedral hugging the disfigured long before Pope Francis, not to mention St. Francis, did the same; and there he is at the right, cutting off a piece of his own cloak to give to a beggar (who turned out to be Christ). That cloak (cappa Sancti Martini) is where we get the word for chapel and chaplain, by the way. 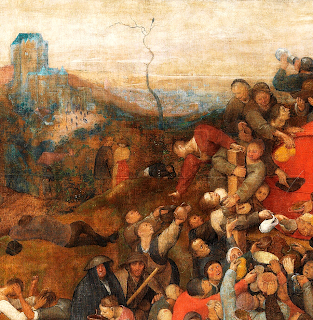 When examining the history of Christianity, a frequent question tends to be: "So, what about all those people executed by Christians?" It's a good question if there ever was one, and it was Martin's long before it was ours. The person with the unfortunate distinction of being the first to be executed by Christians for heresy was Priscillian of Ávila (d. 385), and the killing was (unsuccessfully) opposed by Martin. Although he disagreed vehemently with Priscillian's position (Martin's mentor was the great Trinitarian theologian Hilary of Poitiers), Martin nevertheless thought swords were better used for dividing cloaks than killing the confused. Hence, alongside Hugh of Lincoln (who confronted mobs of English Christians out to slaughter Jews), Martin is one of those saints without which we'd have reason to be all the more depressed about the failures of Christian history, regarding which - after a season of overlooking them - I'm learning to be more forthright.

To the left is another clip from the same massive image, The Wine of St. Martin's Day (Pieter Bruegel's largest). It is humorous, to be sure; but it would be shortsighted to see Bruegel's paintings as a mere caricature, let alone mockery of peasant life. We have in Bruegel "not class ridicule," writes T.J. Gorringe, "but an essentially comic understanding of the world." The hazy church in the background, dispensing the true vine, is the sponsor of this vinous last hurrah, as is Martin in the very same painting, who gives of his excess (actually, no - he gives to excess). So happy Thanksgiving, Fat Thursday, and belated St. Martin's Day, from everyone's (well, certainly someone's) smalltown American website.  Cheers!

Posted by millinerd at 9:20 PM