\ One of Caroline Walker Bynum's frustration with her fellow historians, past and present, is their inability to inhabit the vast contours of medieval thought, choosing instead to pass off the later Middle Ages as either a hyper-spiritualized or overly-materialized milieu.  The former casts the period as the "Age of Faith" (in contrast to some presumed "Age of Reason"), and the latter see the medieval as a mere set up for Reformation critique.  But for Bynum, it is a paradox between the spiritual and material that "lies at the heart of medieval Christianity." To have not perceived that paradox is to have not let the past adequately work on the present.  It's all very anti-Hegelian: 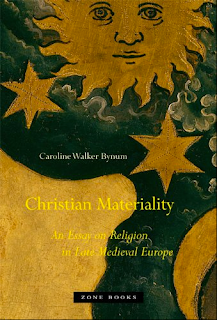 Paradox... is not dialectical.  Paradox is the simultaneous assertion (not the reconciliation) of opposites.  Because of the paradox not just of Christ's incarnation (God in the human) but also of divine creation (God's presence in all that is infinitely distant from him), matter was that which both threatened and offered salvation.  It threatened salvation because it was that which changed.  But it was also the place of salvation, and it manifested this exactly through the capacity for change implanted in it.  When wood or wafer bled, matter showed itself as transcending, exactly by expressing, its own materiality.  It manifested enduring life (continuity, existence) in death (discontinuity, rupture, change).  Miraculous matter was simultaneously - hence paradoxically - the changeable stuff of not-God and the locus of a God revealed (34-35)

In this sense, medieval history can never be properly "understood" as much as experienced. Bynum continues:


Paradox is by definition impossible to explain in discursive language.  One cannot simultaneously assert contraries.  Rude, other-denying facts such as identity and annihilation, or the haunting presence and yet utter beyondness of ultimate meaning, cannot be spoken together. Yet together they must be lived. Their simultaneity cannot be stated; it can only be evoked - and even this only inadequately.

Henri de Lubac takes this even further.  "It is deplorable," he complains in Corpus Mysticum, "that a
theology that sets out to be strictly historical and 'positive' should sometimes commit the historical nonsense of lending its own state of mind to an age where a quite opposite state of mind pertains" (255-56).  De Lubac grew frustrated with historians who had impressive command of medieval source materials, but still failed to understand them because "the spirit in which they were composed has [in modernity] been partly lost" (220).  De Lubac then claimed to have comprehended the very spirit that so many in his time did not.  This involved being, in his words, "seduced" by Christian antiquity. 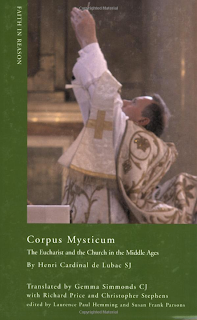 This cloud of minor witnesses, attesting to the vigour of a flourishing tradition by its sheer mass, more than any great name on its own could have done, threw me into a sort of amazed stupor.  This was our family inheritance, and many people had hardly a suspicion of it!  Some had even come to despise it, for want of having properly explored it!  It was a matter, then, of restoring to it its proper value, and that could not be done without sharing as deeply as possible the same perspectives as the age that was being studied.  I would have failed utterly, had I not at least been tempted in some way to induce a nostalgia for that lost age!  But that was in no way to urge an imagined return to its methods or its ways of thinking.  My only ambition was to bring them to light and, if possible, to inspire a retrospective taste for them; and I continue to believe that such a result would not be without a certain profit for the theological project of our times.  Because, without ever wishing simply to copy our forebears, a great deal can be gained from a better knowledge, not only of the fruits of their thinking but also of the interior sap which nourished them (xxiii-xxiv).

The preface to said volume connects de Lubac's perspective on the past to Hans Georg Gadamer's use of the wonderful German word Horizontverschmelzung - the fusion of horizons - a fusion which does not just question the past, but permits oneself to be questioned by it as well.  The alternative (see Reno's review of The Swerve) is to refuse paradox, to soberly resist de Lubac's "sort of amazed stupor," to stave off seduction and remain quarantined in the present.

This is the road most traveled, hence the historians who handle the past with protective gloves lest they get infected, and hence the terms we are stuck with such as "Gothic," "Dark Age," "Byzantine," or - worst of all of them - "the Middle Ages."  But as your scribe stated elsewhere, future historians may very well cast modernity as the dreary "Middle Age" between medieval metaphysical wisdom and its recovery.  So why wait?
Posted by millinerd at 12:17 PM