Endless Knowing of the Victorian Origen 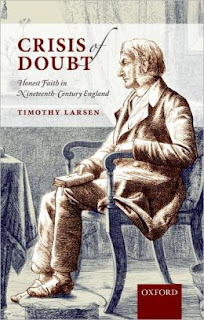 Ben Myers has a charming reflection on Origen as the consummate teacher and the eternal prospect of learning.  A similar case was built in the Victorian era by Thomas Cooper, a self-educated shoemaker, who had served a prison sentence for once sparking a workers' riot, and who rose to prominence in Victorian intellectual culture - even becoming a respected freethinking lecturer - before returning (as as a strangely high number of secular leaders did) to Christian faith.

Tim Larsen explains how Cooper was interested in everything:


He lectured on European political development and on injustice in Ireland.  He lectured on the life and genius of Milton, of Burns, of Shakespeare, of Byron, and others.  He gave a ten-lecture series on the history of Greece and seventeen lectures on the history or Rome.  He gave addresses on Cromwell and the Commonwealth, on the French Revolution, on George Washington.  He gave an eight-lecture series on Napoleon, and four on the duke of Wellington... He gave fifty-one lectures on the history of England.  He did a series on seven schools of painters: Italian, Dutch, Flemish, Spanish, French, and English.  He gave six addresses on Russian history.  He lectured on musicians, including Handel, Haydn, Mozart, Mendelssohn, and Beethoven.  His lectures on discoverers and explores included Columbus, Newton, Cortez, and Pizarro.  He helped his hearers understand Mohammed and Swedenborg.  He lectured on slavery, on the national debt, on the age of chivalry, injustice in Poland, the gypsies, the conquests of Alexander the Great, on ancient Egypt...   the philosophy of Bacon and Locke.  His efforts to educate his hearers in a range of sciences included addresses on vegetation, astronomy, geology, and natural history.  This, moreover, is not even close to an exhaustive list of the specific subjects that he addressed.

It was this catholicity of interests that initially led Cooper to the secular viewpoint, his youthful faith having been eroded by D.F. Strauss' Leben Jesu.  But it was also this catholicity that caused Cooper to think his way through Strauss, finally offering an answer, "counter[ing] well-reasoned skeptical criticism with well-reasoned believing criticism."  Unlike the surface responses of most Victorian Christians, Cooper actually gave Strauss' argument the respect of an honest and thorough response (which required mastery of original languages).  "Someone really interested in the latest thought in the field of modern biblical criticism," explains Larsen, "would have been better off going to hear Cooper at the London Hall of Science than an Oxbridge lecture."

Cooper continued his lecture circuit after his reconversion, often denying the flashier (and better paying) speaking venues to prioritize lower class audiences.  It is no wonder that his voracious appetite for learning caused him to offer an intellectual riff on the argument from desire.  As Cooper put it:


And do we not all know that the more we learn to know, the more we thirst to know?  It is only sheer ignorance that has no desire for knowledge... Is the wisdom of God so abortive as to make a being of boundless desires for knowledge, only at the end of a few years to put him out of existence? .. The Progressive Nature of Man - if I use the most circumspect language - is a strong presumptive argument for a Future Life for Man.

What Myers says of Origen could then equally apply to Cooper.  He "knew scripture and the mysteries of the faith better than anyone. But he knew that all the learning of this life is only preparation for the life to come."