There’s nothing quite so refreshing as a serious art exhibition done well. My wife and I decided a couple years ago to begin supporting Chicago’s Art Institute with an annual membership, which entitles us to free admission any time, and best of all, to any of the Institute’s various exhibitions. I have found that the best way to learn a museum is to enjoy it in pieces, by spending only an hour or so now and again on a Thursday when tourists are minimal—which is precisely why one cannot “learn” a museum on vacation! Over the last couple years, I have begun to learn the Art Institute: first by viewing an intriguing presentation of the museum’s modern collection, then by perusing the new glorious Modern Wing, and recently, last weekend, through an exhibition on the life of Henri Matisse. Matisse’s later works offer a curious blend of impressionist sensibilities and cubist form. I am no specialist in art’s history, but having seen Matisse’s name a number of times in impressionist collections, I have developed the sense that he is something of an anomaly, an odd wedding of Picasso to Manet. 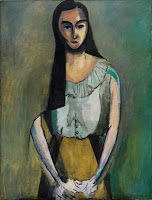 Having a membership makes spending five bucks on an audio guide that much easier, and I was not disappointed. Erudite yet concise commentary led us from the beginning of Matisse’s career through the war years and just beyond, tracing Matisse’s development of what he called “modern methods” of artistic construction. The curators were wise enough to present a standard chronological narrative—there are too few these days in a world of poorly written history!—that used the creation and revision of a single piece of art to anchor Matisse’s Vita: a bas relief entitled “Back.” Upon entering the exhibition we discovered evidence of an intimate connection between media in Matisse’s mind: a bronzed “reclining nude” enfleshed a painting of the same hanging on the wall. Next we found the very first version of “Back (I),” with its softly chiseled lines and rather humanized, if bulky, rendering of a female form. The bulky “females” of Michelangelo’s works came readily to mind, but what Matisse wanted to evoke was left to the imagination. It was this “Back” that Matisse would refashion several times over the course of his career, and which embodies the transformation of his life’s work through time. But this piece interested me only indirectly. The exhibition’s treatment of “Back” illustrated Matisse’s obsession with any given subject’s temporal duration, and it was this obsession that I found fascinating.

The curators repeatedly taught me that nearly every single piece of Matisse’s works bears marks of its construction. Matisse intentionally left older forms of painting visible beneath layers of paint. Lines are often etched out of the final layer to reveal earlier colors. The viewer sees such marks, if only subconsciously at first, and knows that something has been changed—but why? And when? As it turns out, Matisse had been profoundly influenced by the philosophy of Henri-Louis Bergson, who posited a kind of Heraclitean flux as the nature of all reality. It was Bergson’s emphasis on the permanence of change that caused Matisse to leave a permanent record of his own artistic flux, his development, etched into his paintings and sculpture. Matisse had become so historically conscious that not even his own thoughts were not subject to revision. And suspecting that his art would end up in museums, one supposes that Matisse intended for such marks of change to be left open to public view, just so that we could come to understand his art. 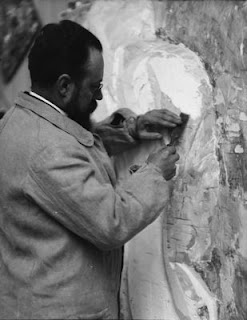 It was just here that, as a theologian, I was reminded of the work of various modern theologians, but especially the work of my friend and teacher, Bruce McCormack. McCormack’s thought is always on the move. Anyone who has studied with him will happily tell you how quick-witted he can be. What struck me was the extent to which both Matisse and McCormack are not only historically conscious, but historically self-conscious. In McCormack’s latest article on his own controversial engagements with the theology of Karl Barth (Scottish Journal of Theology 63.2: 203-224), he is already offering a kind of periodization of his own thought. It is as though McCormack is leaving marks of construction in print, to aid later generations—and perhaps even contemporaries—in the historical reconstruction of his own development. Matisse left tracks in paint; McCormack leaves tracks in print.


But is this not self-aggrandizement or arrogance? Aren’t Matisse and McCormack subject to that hideous lable, megalomaniac? Perhaps a cynic might claim so, but let artists be artists, and let them know they are such. Besides, such a cynical view obscures the vulnerability it must have taken Matisse (and McCormack) to display candidly the process of his artistic productions, warts and all. Though here it must be admitted that such a display is itself part of the art; the final product’s attraction is its display of its own creation, its apparent transparency. Lest the reader criticize McCormack for giving too much to a stream of Heraclateanism—what many will call a kind of Hegelian “historicization of being”—in modern theology, allow me to retort. It may be true that McCormack’s own theological ontology goes further than some might (presently, myself included), but I am not sure he is finished pressing his own thoughts on the matter to completion. Indeed, insofar as we’re all works in progress, historical self-consciousness might generate a touch more requisite humility in theological debate. Hasty reading and analysis are twin evils of virtuous argumentation. Though I am no fan of dancing around important questions, or of refusing to face up to logical dialectic, the wisdom of the hermeneutics of charity becomes all the more compelling when we consider that we are, each of us, working thoughts out in time.

I find it hard to deny that our perceptions of reality are constantly changing—necessarily. Plato, in the voice of Timaeus, was careful to insist that even the most precise accounts of the physical world are only probably true, since the phsyical world is constantly in flux (natural scientists, take note). Perhaps McCormack’s theological modus operandi is much closer to traditional modes than either he or a number of his wistful detractors would like to think. Consider Augustine, arguably the first theological Matisse. His Retractationes offer a retrospective gloss like no other. It is at once refreshing and illuminating to consider Augustine’s commentaries on Genesis as they first appeared, and then to consider his reconsiderations regarding the same. It seems the Bishop of Hippo felt it good and right to leave his own “marks of construction,” lest his readers think his own thoughts never changed. Indeed, one gets the sense that a whole host of theologians might look back on their lives and agree with Matisse: “I feel very strongly the tie between my earlier and my recent works. But I do not think exactly the way I thought yesterday. Or rather, my basic thought has not changed, but it has evolved, and my means of expression have followed. I do not repudiate any of my paintings, but there is not one of them that I would not redo differently, if I had it to redo. My destination is always the same, but I work out a different route to get there."

Kellen Plaxco is pursuing a Ph.D. in theology at Marquette University
Posted by millinerd at 3:54 PM