Peter Jackson to White Light: "You shall not pass!" [for heaven]

CGI has not necessarily been good to the afterlife. When in the actual heaven, I imagine we will look back to film depictions of it and grimace with embarrassment, followed by relief that heaven is much more interesting (with far fewer gazebos).  Though not without gazebos, Peter Jackson's chronicle of a deceased fourteen year old girl, The Lovely Bones, is something of an exception. Without spoiling anything, I will point out five things to be watched for, things which might - if noticed - be enough to set off a boycott by the Brights of the upcoming DVD release date. 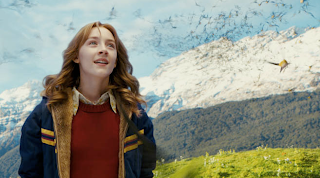 1. Sensing the apophatic impossibility of depicting heaven in film, Jackson wisely doesn't even try. Instead, following The Sixth Sense, Jackson tries his hand at purgatory, "the in between," as one character calls it.   Fans of The Great Divorce will find themselves in familiar territory.  There is, accordingly, only a subtle foretaste of heaven in the film, described more than depicted by one heaven-destined individual in this way: "Of course it's beautiful."

2.  The film does not avoid all clichés, such as the artsy goth girl tuned into the spirit world.  But the white light cliché, which so often substitutes for serious consideration of what it must be like to die, took a serious pounding.  Jackson dispenses with it immediately, making it a scene not of grace and mercy, but of something quite chilling.  Betty Eadie will not be pleased.

3.  And nor will Buddhists.  Early on, the lips of an alcoholic grandmother, played by Susan Sarandon, remarks, "You know the Buddhists say...", which is followed by an empty platitude.  The film's sequence of events flatly contradicts the sentiment, and in case we might miss that, the narrator recites, "As usual, Grandma was wrong."  Within the first fifteen minutes of the film, Jackson has sealed off the pluralist exits, only to steer his audience into subtley Christian turf.

4. Most recent film depictions of the afterlife, fitting safely under the canopy of Moralistic Therapeutic Deism, can be critiqued with that perpetual, and admittedly appropriate, evangelical protestation, "What about the cross?"  As if in response, Jackson delicately places the cross as centrally in this film as it was in the last episode of the X-files series. Watch for it, and notice this cross of forgiveness (there are actually two of them) is nothing less than the passageway to heaven itself.  Alice Sebold, whose book inspired the film, insisted that her work was not supposed to be religious, adding, "but if people want to take things and interpret them, then I can't do anything about that." I suppose she also couldn't do anything about that when it came to her chief interpreter, Peter Jackson.

5. A good bit more subtly, Jackson hints at the possibility of hell.  In fact, there's enough justice and setting right in this film to have Jackson scratched off the Cohen brothers party guestlist for the foreseeable future.

We may have needed more than Marky Mark in the challenging role of grieving father, and we could have done without Le Petit Prince montages. But hats off to Peter Jackson, who - theologically speaking - has recovered that poetic device routinely forsworn by most American filmmakers:  Understatement.

Update: A loyal reader passes on this link to the Kindlings Muse podcast that discusses the film, albeit much more extensively. Jennie Spohr and Jeff Keuss make some fine observations. Keuss contrasts The Lovely Bones to the rank materialism regarding heaven in The Invention of Lying. "Heaven is not a place," he retorts, "but a Person: Jesus Christ." Staub's show put Sebold's book into conversation with a more robust, less individualistic Christian understanding of the afterlife. My point is simply that Peter Jackson's film interpretation seemed, at points, to do the same thing.
Posted by millinerd at 3:12 PM