An Easter sermon preached today at All Souls Church in Wheaton (audio here):

It’s exciting news when the most brilliant disciple of the atheist Sigmund Freud sees the need for belief in God. As many of you know, the name of this student was Carl Jung, and there is a lot one can learn from him. But here is one thing he really got wrong: “It is funny,” Jung tells us, “that Christians are still so pagan that they understand spiritual existence only as a body and as a physical event. I am afraid our Christian cannot maintain this shocking anachronism any longer.”

And so having cited this unfortunate remark of the great Swiss physchiatrist, please indulge me again, maybe with an Alleluia at the end this time. 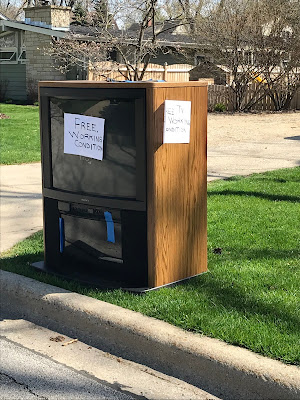 The field of Biblical studies is wonderful. You can learn all kinds of things about the Ancient Near Eastern and Graeco-Roman contexts in which the Biblical books were originally written, you can learn the original languages. But as in any field, some people in Biblical studies make some miscalculations. I speak of the Biblical scholar Gerd Lüdemann: “A consistent modern view must say farewell to the resurrection as a historical event.”

Having heard that, please indulge me once again.

The notion that you can keep Christianity without resurrection has aged about as well as pay phones, in-flight ash trays, spitoons, hoop skirts, zuit suits, and those massive televisions that we used to have to cram in our living room and the gargantuan pieces of furniture we used to hide them before the flat screens came along.  You still sometimes see those huge TVs on the curb, usually with five garbage stickers on them because no one wants them!  And who would want a Christianity without resurrection either?

It’s often said if the resurrection isn’t true, don’t go to church, go to brunch. Well I was at one of those Chicago brunch meccas just this week and I overheard the bartenders planning the cocktail menu for this Sunday – Easter morning. And they said, “We need to mix up our menu to bring people in.” One employee said, we could change up the Bloody Mary with a bloodless Mary, which I guess is some kind of cocktail. And how I wish I had had the courage to say then and there, “Sounds like perfect cocktail for someone without resurrection hope on Easter Morning! Bloodless Mary.” But because he is risen we’re not at brunch, we’re here instead to drink from the veins of the risen Christ, and today at least we’re throwing in brunch too.

I’m sure you know the great John Updike poem, Seven Stanzas at Easter:


Make no mistake: if he rose at all It was as His body; If the cell’s dissolution did not reverse, the molecules reknit, The amino acids rekindle, The Church will fall.

Let us not mock God with metaphor, Analogy, sidestepping, transcendence, Making of the event a parable, a sign painted in the faded Credulity of earlier ages: Let us walk through the door.

Or better than Updike’s poem is this bald statement of fact in 1 Cor 15; “If for this life only we have hoped in Christ, we are of all people most to be pitied. But in fact Christ has been raised from the dead, the first fruits of those who have died.”  Or Acts 10: “We are witnesses to all that he did… They put him to death by hanging him on a tree; but God raised him on the third day.” That is not a pious sentiment, a clever aphorism, haiku a or a sonnet - it’s journalism. They killed him, God fixed it, says St. Peter.

One reason that resurrection matters is because it addresses our root anxiety. There are a lot of surface anxieties in our lives, and some that cut a good bit below the surface. But if you follow those anxieties to their root, and ask yourself, “what’s the worst thing that could happen?” The answer tends to be: “Somebody could die.” That’s about as bad as it could get. And that root anxiety of our impermanence is what drives so many of our worries, agendas and sins – and so the root anxiety is the one Jesus addresses this morning not just by his words but with his body, by conquering death and replacing it with the root peace of the risen Christ.

That root peace is why Roger Persons, a member of our congregation, when his wife Jean died while they were watching TV together, was able to address her then and there and say, “Walk with the king.” That root peace is why Jason Long and I, sitting at the top of Central Dupage Hospital with Brett Foster as the sunset beamed into the hospital room so strongly that I had to put on my sunglasses, felt strangely, in retrospect, like Brett was preparing us for our own deaths as well. When I think of Brett, my memory now skips from that hospital room to his funeral where we heard these words from the Orthodox poet, Scott Cairns, about the resurrection – not Jesus’ resurrection, but mine and yours.


...one morning you finally wake to a light you recognize as the light you’ve wanted  every morning that has come before.

And the air  itself has some light thing in it that you’ve always hoped the air might have.

And One is there  to welcome you whose face you’ve looked for during all  the best and worst times of your life. He takes you to himself  and holds you close until you fully wake. 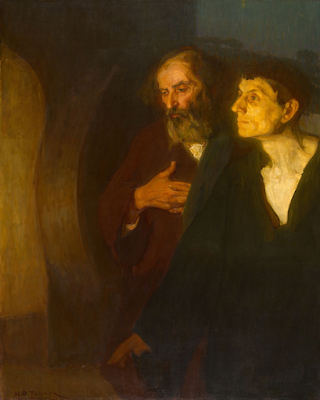 And in our gospel passage, Mary of course – like all of us on this side of death – is not yet fully awake. She makes first contact with the resurrected Jesus, and it’s about as awkward as Peter embarrassing himself by trying to pitch a tent on Mount Tabor. Mary’s problem is that she thinks Jesus is dead, and when she sees that he’s gone, she consoles herself by saying, "They have taken the Lord out of the tomb, and we do not know where they have laid him."

I wonder if it’s her root anxiety in the form of a sentence. It signifies confusion, frustration and maybe even a little panic. I almost imagine her wandering off in a daze reciting those words in some kind of stupor. "They have taken the Lord out of the tomb, and we do not know where they have laid him." Then the disciples show up, Peter and John. And of course, the best illustration I know of that moment in all the world is a train ride away at the Art Institute of Chicago. It’s by the African American painter Henry Ossawa Tanner. It shows Peter kind of concerned, almost twiddling his thumbs cause he knew he blew it – and John, the beloved disciple has this beaming look on his face, as if to say, “I knew it!”  Tanner suffered from racial prejudice all his life – he believed in resurrection. Still, in our passage, neither Peter nor John stick around.

But Mary wanders back, still clinging to the best she can do under the circumstances. Call her the Bloodless Mary, wringing her hands as she repeats, "They have taken the Lord out of the tomb, and we do not know where they have laid him." And then she gets what we all think would work for us if only it would happen: An angelic visitation. “She bent over to look into the tomb; and she saw two angels in white, sitting where the body of Jesus had been lying, one at the head and the other at the feet.” I hope you’re catching that this is a reference to the ark of the covenant – two angels surrounding a void of presence – the absence that signifies that God cannot be contained. And the angels, puzzled say to her, "Woman, why are you weeping?"

And her reply? "They have taken away my Lord, and I do not know where they have laid him." The presence of the angels doesn’t clear up her confusion, so the Lord himself explains it to her. “She turned around and saw Jesus standing there, but she did not know that it was Jesus. Jesus said to her, "Woman, why are you weeping? Whom are you looking for?" Now that is a reference to the mystical treaties the Song of Solomon if there ever was one – God’s pursuit of the soul. “Whom are you looking for?” God asks this to all of us this morning. 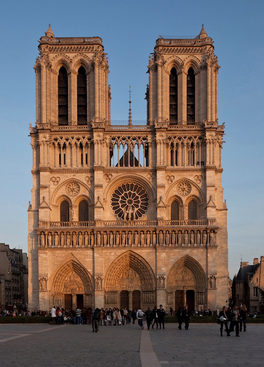 But it doesn’t work! Mary thinks he’s the gardner. And she offers her good intentions and pious objectives one more time. "Sir, if you have carried him away, tell me where you have laid him, and I will take him away."  She still clings to her pre-resurrection agenda. On Friday from one of our speakers said that Jesus was LOUD on the cross and I think he’s loud here too.  He has to be loud enough to snap her out of her pious plans to anoint his corpse. And so he shouts with smile, "Mary!"

There have been a lot of good stories about Notre Dame de Paris this week, but here’s the best one I know of. Denise once told me that when she was there with her mother and sister, they were touring the Cathedral which was packed with tourists, when a mother lost her son. And my wife Denise knows the name of that boy, as does everyone who was in Notre Dame that day because the mother started to shout it. Dimitri!  After three shouts the packed cathedral fell silent but she kept shouting, no - screaming, “Dimitri! Dimitri!” until he was found. And that, after all, is what Notre Dame’s architecture is – it is the risen Christ shouting to you through beauty. Shouting your name and mine, trying to snap us out of our own agendas, even our own ambitions to serve him. That’s what beauty does, what pain does, what tragedy, suffering and joy do. They’re all the risen Christ shouting our name again and again in the Cathedral of this cosmos while the cathedral lasts.

And like Mary, we wake up, “Teacher!” and we cling to him, as any of us would. That's what coming to church is about. But then comes Jesus’ famous lines to Mary: “Don’t hold onto me.” He does not mean back off. He tells her to stop clinging to him because he has something for her to do. Not her agenda this time but his. Namely, Go tell the boys. In all four gospels the women are first, the only difference is the number of women who are present. And each gospel the mission of the women is the same – and it is from them that we get the message with which we began.

He is risen: He is risen indeed. Alleluia!
Posted by millinerd at 12:58 PM