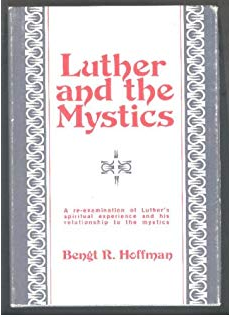 From Bengt Hoffman's Luther and the Mystics (1976):


Martin Luther's faith consciousness was significantly molded by mystical experience and western dependence on rationalism has obscured or eclipsed this mystical light. This is to say that the rational attributes of trustworthiness and loving care ascribed to God and the corresponding realities of faith and trustfulness found in man, are shot through with non-rational intimations, experiences of fascinating, awe-inspiring and bliss-giving presence. Luther's language about God residing in the heart of the believer was not only figurative. It was based on actual experience. The rational terms for God-man union were underpinned by a mystical knowledge. As indicated, there are barriers built into western intellectual thought structures which render it difficult to grasp the intimate connection between the conceptual-doctrinal and the experiential in Luther's legacy" (18-19).


The genius and contemplative experience of Ignatius of Loyola led him to channel the contemplative tradition, which was in danger of being lost... [but the] unfortunate tendency to reduce the Spiritual Exercises to a method of discursive meditations seems to stem from the Jesuits themselves. In 1547 Everard Mercurian, the Father General of the Jesuits... forbade the practice of affective prayer and the application of the five senses. The spiritual life of a significant portion of the Society of Jesus was thus limited to a single method of prayer, namely, discursive meditation. The predominantly intellectual character of this meditation continued to grow in importance throughout the Society during the course of the eighteenth and nineteenth centuries... [Accordingly, early modern Catholicism] received the limitation imposed not by Ignatius, but by his less enlightened successors (23).

Philip Endean's article, Luther in Ignatian Light, goes further along these lines. Meanwhile, three cheers for the primary sources themselves!
Posted by millinerd at 1:02 PM