There are (at least!) two temptations that beset a group of Midwestern Christian college students who spend a month in London. The first might be to fear the secular city, tip-toeing around it but mostly keeping to ourselves. The opposite (and more common) temptation comes from allowing ourselves to be bedazzled by diverse, stimulating, enrapturing London, and then looking back with predictable disdain on the narrowly Christian American suburbs we left happily behind.

But as our intensive Arts in London course over four weeks in London and Wales began, we attended "Choral Pilgrimage 2018: Sacred and Profane," by legendary choral group The Sixteen at the Royal Naval College. There we read this in our program from Robert Hawkins, which effectively neutralized those twin temptations:


Today we might hear the terms 'sacred' and 'secular' as opposing poles, as if there were a clear separation between religious matters and worldly affairs. To think in this way is rather 'secular' in itself, and very particular to modernity...  The word 'secular' comes from the Latin saeculum (generation, age): It is used in Christian Latin to mean 'the world'. This isn't to say 'secular' had nothing to do with 'the Church'; it merely distinguished between monks, who were called to 'renounce the world', and priests, who interpreted their vocation as a need to get stuck into the affairs of the world, and to do God's work there.... For a modern viewer, particularly one without religious conviction, the all-encompassing nature of this sacral worldview can be hard to imagine. Part of the significance of beginning to see with believing eyes is the realisation that the extraordinary is to be found in the ordinary, the sacred in the profane (11).

We took this article as the Magna Carta of our trip, and set out - like those secular priests - to pursue the sacred, in a robustly Christian way, in the ostensibly "secular" space of London. (It certainly helps that all museums are free.) Like the snake the St. Paul handled in the massive fresco in the Royal Naval Chapel, we trusted that presumably secular culture would not poison us. 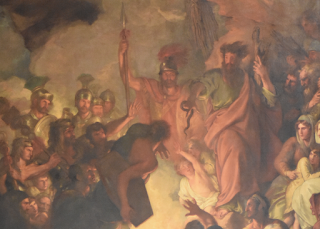 Taking the motto of our parish church in Highbury Islington, "roots down, branches out," we refused to be scandalized or seduced by the city. We weren't afraid of London; but nor did we despise the Midwestern evangelical tradition that has reared us, and which taught (and teaches!) us how to inhabit a cosmopolis without losing our Christological nerve. The result was we found God everywhere. And not a generic God either, but Father, Son and Holy Spirit. After all, as Columbanus put it in the sixth century, "Ineffable, Incomprehensible, he fills all things and transcends all things;" or as R.S. Thomas put the same insight in the twentieth, "you [God] terrify me as much by your proximity as by your being light years away."

God was so present in fact, that over a reflective dinner in Wales, our class came up with a list (embellished and/or warped a good bit by me) of the ways the sacred/secular boundary was breached during our pilgrimage. The list is far from exhaustive, and here it is:


The Sacred in "Secular" London (& Oxford & Wales):
So then, what hath London to do with Jerusalem? The Passover red of the Rothko room gave us an answer: Everything. And if there is any mission for a Christian liberal arts college in the twenty-first century (and there is), it is to help students (and professors) realize that the same answer applies to Istanbul, New York, Berlin, Marrakesh, Chicago, Buenos Aires, Los Angeles, Singapore or Jakarta. 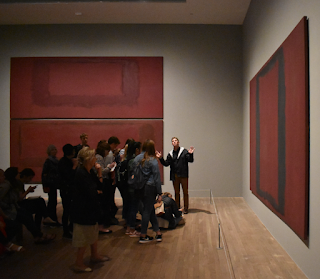 Though we might well admit that sometimes it seems London includes all these cities at once.

Posted by millinerd at 3:56 PM