Another year, another devastating, agonizing situation at Wheaton College (where I teach). As news unfolds (or actually, as it most acutely does not unfold), a choice of scapegoats presents itself, to which varieties of people will be irresistibly attracted. Heck, there was even a mention of goats in the original Trib story. Make no mistake, we are sickened (the word chosen by our highest Faculty representative), and we are waiting. Some have asked what we tell our students in the meantime. Well, I’m giving them a pop quiz. The hardest one I've given yet. Cruel, I know.


Goat A: The victim of hazing. To the extent that he suffered, there is the temptation now to cause him to suffer again, suggesting this is all a fabrication.

Goat B: The victim’s parents and/or lawyer. Speculation runs to suggest that the victim is a stooge in their attempts for a lawsuit.

Goat C: Journalists. In the desire to generate a story they took one side, ran with it, hit the click bait jackpot, and made the lives of students, staff and faculty miserable.

Goat D: The Football Team or Coach. The culture it generates and the students therein are the real culprits, and they must pay.

Goat E: The Administration at Wheaton College. Surely to protect the football players or some other misguided but unseen purpose, they permitted this to occur, exacting meaningless "discipline." It's their fault.

Goat F: American Evangelicalism. The machismo, the political triumphalism, the muscular Christianity, the catastrophic naiveté – that’s what made this happen.

STEP TWO: Having chosen a victim, imagine him, them or it undergoing a scenario of total incrimination. If you chose the victim of hazing or his parents or journalists (A, B or C), imagine a New York Times headline showing that he made this all up to get back at the Football team, and a Good Morning America apology to Wheaton College for spreading Fake News. If you chose the Football team (D), imagine the whole program being shut down forever and the funds redirected to toward a new addition to the library. If you chose the Administration (E), fantasize a total leadership change, and a crack team of brilliant and diverse professionals to clean house once and for all. Or if you chose American Evangelicalism (F), imagine its expiration after being exposed as fraudulent to the core. Imagine emptied churches, an army of young, vibrant, intelligent defectors simply moving on.

STEP THREE: And now the big reveal. Christianity teaches that none of these fantasies, delicious as they may seem, would really satisfy you. If the victim's allegations are exposed as fraudulent, even in part, real damage would still be done and he would still be the beloved of God. If the Football team was shut down and the library renovated Wheaton could hold its head up to a certain constituency for a season, but new problems – new, unforeseen and perhaps equally challenging problems – would persist. A changed Administration would also work for a season, and then would have their own unforeseen failings. (And the biggest problem with any new Administration is that they would not be the ones you need to forgive!) And finally, American Evangelicalism, corrupt as large swaths of it may be, would be replaced by a different, less kind version of the right that we are already seeing.

YOUR GRADE:  Sorry, but you failed.  No one can really make it through STEP THREE honestly. I certainly can’t. The fantasies are too irresistible. We must have our sacrifices, even if we conceal the transaction from ourselves. But Christianity suggests that behind them is the lie that sacrifice will satisfy.

MAKE UP QUIZ: If you're up for it, the hardest mental exercise (a prayer exercise really), is to take the victim to which you are most inclined (I can name mine easily) and instead of imagining them being sacrificed, imagining mercy being poured upon them. Again, it’s impossible really. No one will really try.

But for those that do, when the real culprit(s) is/are revealed (and yes, legal justice must of course be served), if it turns out it was partly fabricated (perhaps), or that the Football culture is the problem (it may be), or the administration must step down (all possible scenarios, I imagine), or that it's our professorial culture that generated this situation (you never know), then there will be no “Ah ha!” Regardless of necessary legal outcomes, there can be no exulting, but only more mercy. Indeed, that is where mercy really would come into effect, when the perpetrator(s) is/are revealed. Because then mercy would actually be undeserved – and the word for favor that is completely undeserved is grace. Finally, at this point, the scapegoating mechanism is redirected to the mirror. For such are the conditions by which anyone can enter the Christian faith in the first place. And it is this first place that most of us, myself especially, pathologically forget. Which again, is why I, and you, failed this quiz.

I'm not going to sugar coat it either. We really should have studied harder. And that's not my counsel, by the way, those are the words of Christ from today's Feast of St. Matthew Gospel reading: "Go back home and study your Bible, and learn what this means, 'Mercy is what I want, and not sacrifice.'" (Matthew 9:13).

UPDATE (Sept. 22, 9:04PM): Matt Vega was kind enough to post my reply to a constructive post of his that expressed concerns about whether this exercise is flippant toward victims of abuse. You can read it here.

Please call me Matt. Your exercise here points out the preeminent danger of blaming the victim, and I thank you (not perfunctorily, but sincerely) for it. You may have noticed that in my list of scapegoats, the victim was first. That was intentional. I’m even tempted to assimilate your post as necessary reading for those who are “irresistibly attracted” (as I put it) to victim blaming. They should, they must, read these reports. Again, they sicken me. I’m glad expulsions happened when called for.

My quiz was, as I’m sure you realize, a prayer exercise not a policy proposal. It was not intended as taking a side in our situation, but as an examination of our hearts individually as that situation slowly, painfully unfolds. You seem to characterize this prayer exercise as a sort of self-hypnosis. Prayer sure can be that, and that’s a good warning. You suggest I have an allergy to anger. And yes, I do! And may it increase! I hope I am allergic to much of the anger that I’ve been seeing flying around me – and most importantly – the kind that is rising from my own heart. I hope I am allergic to the anger that suggests that Wheaton will always be wrong: wrong if these Football players are deemed innocent (we protected them!) and wrong if they are deemed guilty (our muscular Christianity goaded them on!). I hope I'm allergic to the anger that suggests Wheaton will always be right: right if the victim’s allegations are substantiated (the lawyer poisoned the wells!) and right if his claims are disproven (the mighty sons of Wheaton always prevail!). May we all be allergic to that kind of sickening smugness – to such “anger” falsely so called.

But there is of course the right kind of anger to which I aspire, and perhaps I will be called upon to use it. And I would suggest it can only arise after one successfully “passes” my quiz. I learned about it, by the way, from Abraham Joshua Heschel, whom you cited. And not just from a google search to come up with a witty comeback, mind you. No, I’m talking about the beat up, heavily marked, lovingly underlined, furiously engaged 1955 Buswell library volume pored over by generations of Wheaton students. The same book you cited, in fact (The Prophets). Therein I read, 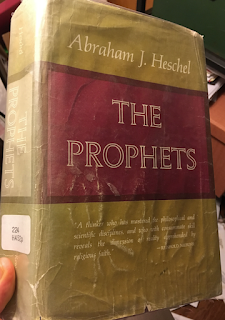 As a matter of pathos, it may be accurate to characterize the anger of the Lord as suspended love, as mercy withheld, as mercy in concealment. Anger prompted by love is an interlude. It is an if compassion were waiting to resume. …To sum up, the pathos of anger is by no means regarded as a quality inherent in the nature of God, but rather as a mood, a state of mind or soul. In both its origin and duration, anger is distinguished from mercy. It is never a spontaneous outburst, but rather a state which is occasioned and conditioned by man... The pathos of anger is further, a transient state. What is often proclaimed about love - ‘For the Lord is good, for His steadfast love endures for ever’ (Jer. 33:11; Ps. 100:5; Ezra 3:11; I Chron. 16:34; II Chron 5:13; 7:3) is not said about anger… The normal and original pathos is love or mercy. Anger is preceded as well as followed by compassion (Jer. 12:15; 33:26)… Even in the midst of indignation, His love remains alive. (297-298).

If that’s your kind of anger I am glad, and I am honestly envious. I’m afraid it is not yet mine. But I think that’s what might come out of the prayer exercise I recommended. Speaking of which, please pray for me. (I mean that.) I wish I had been able to talk with you more while you were here so that this request would have more meaning. Maybe you can pray that this right kind of anger will arise in my heart when times require it, that is, when I know enough to accurately deploy it. It may involve speaking bluntly. It may not be polite. Of course, leaving Wheaton with anger untinctured by even the distant whiff of scapegoating might be the only way forward. But there are, of course, a variety of prophetic vocations. Consider what Heschel says about Hosea.


As time went by, Hosea became aware of the fact that his personal fate was a mirror of the divine pathos, that his sorrow echoed the sorrow of God. In this fellow suffering as an act of sympathy with the divine pathos the prophet probably saw the meaning of the marriage which he had contracted as the divine behest.

Perhaps that kind of sorrow, committed to a place and seeking to confront it if necessary, sometimes in anger that arises from the depths of prayer, but without leaving – might be a way ahead as well. We’ll see.

Thank you for your post. If you think this would be helpful to your readers you may do with it as you wish.

UPDATE: (Sept. 25, 3:44PM). Glad to see Matt Vega's post is back up, and here's one more follow up in response to a colleague, where I claim that baptism is the only acceptable hazing in a community that claims to be Christian.
Posted by millinerd at 10:34 AM