It's at Wheaton College, but Venice Biennale was all booked up

Certainly among the clearest and most straightforward diagnoses of contemporary art is Nick Mirzoeff's appropriately entitled article, "'That’s All Folks': Contemporary Art and Popular Culture." 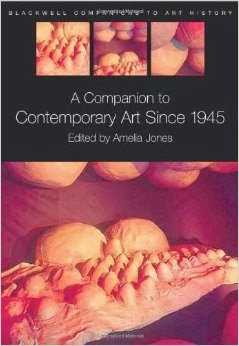 For all the power of Fosso or Sherman’s work, it must be said that photography in particular and art in general have not been transformed by what was then called ‘the pictures generation.’ At a political level, the utopian idealism of pan-African decolonization gave way to the realpolitik of individual nation-states, caught up in the global game of the cold war. With the collapse of the Soviet Union, global capital has been able to reassert itself in very forceful fashion under the political leadership of the United States. In the case of visual cuture, the consequences has been the emergence of a globalized ‘art world.’ Composed of a series of annual or biennial exhibitions and a number of international art magazines, featuring a broadly similar cast of global artists, the art world has its own vocabulary, structures, and finances. Anchored by such institutions as the Venice Biennale, Documenta (held every five years in Kassel, Germany), the Whitney Biennial in New York, and magazines such as Flash Art, Artforum, and Parkett, the art world is exhaustive and exhausting.  It perceives itself as a space of contestation of global capital, while being almost completely an expression of that capital and its free flow into immaterial labor.  For it was the project of the avant-gardes to find a way of moving from the inside of bourgeois society to an outside vantage poing from which a critique against the value of this society could be mounted, there is, in Hardt and Negri’s view, no longer such an ‘outside’ view to be had. The aesthetic project of modernism to act as a moral counterpoint to mass culture – has collapsed, for better or for worse, such that art works are now promoted through this globalized niche market as luxury commodities (in this sense, as a kind of specialized mass culture). It is surely the task of those making art, writing  about it and going to experience it to come up with ta better way to rekindle the emancipatory potential of the work of art (507-509).

Of course, mammon and momentum ensure that everything will hum along just fine. But if one is convicted by Mirzoeff's remarks to the point of hoping for a solution to the intractable dilemma he poses, get out of the art world and venture to a small evangelical college for the Image of God in an Image Driven Age conference (with web videos to come and a book as well).  There you'll see that my Art Department colleagues, among other fine speakers, may - and I am not kidding here - afford the very emancipatory potential Mirzoeff calls for above.

Here's the schedule (I'm on Thursday at 4:15pm). Please consider registering to join us. 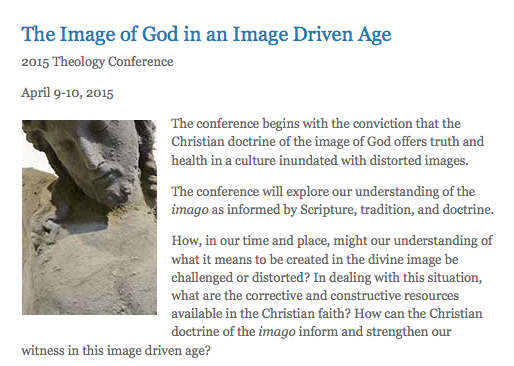 Posted by millinerd at 5:06 PM