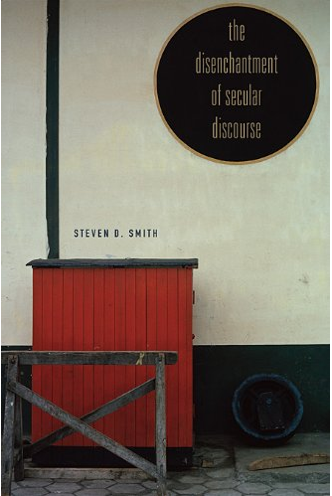 What is there to add to the responses of Jones and Jacobs to Peter Conn's call to de-accredit religious schools ("The Great Accreditation Farce"), other than to offer yet another gentle nudge to wake up and smell the post-secular discourse?  Stephen D. Smith's The Disenchantment of Secular Discourse, published by some obscure, sectarian, confessionally biased place called Harvard University Press, is a good start.

Smith elucidates that the kind of "neutrality" advocated by Conn has been tried, and tried repeatedly, in the public square.  And if it didn't work there, the same goes a fortiori for the academic milieu.  Proponents of reason as "referee" include John Rawls, Bruce Ackerman, Ronald Dworkin, Thomas Nagel, Amy Gutmann, Dennis Thompson, Stephen Macedo, David Richards, Charles Larmore, Samuel Freeman, Richard Rorty, and Robert Audi.  That list is from Northwestern Law Professor Andrew Koppelman, who concludes the strategy "has been a disaster, because it has produced the opposite of what they have hoped. A doctrine grounded in universal respect has left a lot of actual citizens feeling profoundly insulted" (Religion as a conversation starter).

For his part, Smith dubs this condition the "iron cage of secular discourse."


We can try to treat all of our normative commitments as if they were the sorts of commitments that secularly congenial disciplines like economics or rational choice theory can recognize...  but then we may perceive that we have done violence to many of our deepest convictions. Where we can refuse to attempt that translation; but then it is awkward finding within secular discourse the words and concepts to say what we really want to say and to articulate what we really believe.

Smith points out the irony of Richard Rorty's "conversation stopping" objection to religion, an irony that applies to Professor Conn's objections as well.  "After all, who is it that is trying to stifle or regulate conversation? Rorty's opponents are not telling him: 'Stop talking secular.' Rather it is Rorty and like-minded thinkers who issue the injunction 'Don't talk religion.'" What's more, Rorty was honest enough to realize that any exclusively secular claim to "reason" was necessarily bogus.  "The claim that we [secular atheists] are appealing to reason whereas the religious are being irrational," he wrote, "is hokum."

The result of Rorty's confession, Smith concludes, is that


Rorty's continued insistence on excluding religion from public discourse begins to look merely arbitrary - an inherited commitment derived form assumption he no longer accepted, and which had hence degenerated into a mere prejudice.  More generally, his prescription looks like a recipe for a discourse that is assured in advance of being shallow, empty, and pointless.  Why would anyone want to waste precious time and energy in that sort of predictably futile and boring conversation?  Contrary to Rorty, it appears that it is not religion after all, but rather the imposition of artificial constraints on discourse, that is the "conversation stopper."

Meanwhile, those who broke out of the cage seem to have offered a few contributions here and there.


Proponents of religion in the public square respond that the sort of objection raised by Rorty and others exhibits misunderstanding - or simply ignorance about what religion is - on the part of those who make it.  There is nothing inherent in religion, they say, and nothing distinctive to religious believers, that is more preemptorily preclusive of discussion then there is in other, more secular perspectives and believers.  Proponents may point to an earlier era's overtly theological analysis of public concerns like Martin Luther King, Jr., Reinhold Niebuhr, John Courtney Murray, and Abraham Joshua Heschel - reflective analyses displaying a depth of wisdom and insight that compare favorably (to put the point gently) with those of more contemporary and secular political thinkers - as evidence that religious perspective can enliven and deepen public deliberation rather than truncating or silencing it.

But perhaps Smith's call to open the cage of secular discourse is only appealing to me because, as a Wheaton faculty member, in addition to other constraints, most of my time outside the classroom is actually spent in a 5 x 5 x 5 foot cage.  And while I will certainly be transferred to the hole for publishing this blog post without permission, I will surely emerge in time to memorize my pre-approved Fall lecture scripts, and I wish you a happy Independence Day.

Posted by millinerd at 2:26 PM