Of Beauty and Suicide Bombs 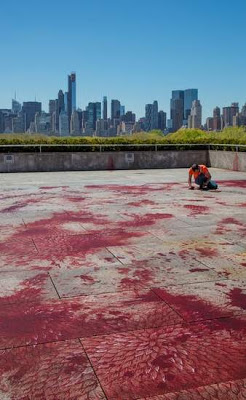 Below is a response I gave to Eleanor Heartney at CIVA's art and justice conference this weekend.  Thanks to some discussion that followed, I've developed it below.

We've been asked today if beauty can be used to obscure justice, and it has been suggested that there is not one way to bring art and justice together.  In response, I'd like to offer one recent place where beauty has - it seems to me - obscured justice, and to put forth that traditional religious imagery should also be considered an especially effective locus of justice.

The roof of the Metropolitan Museum of Art is currently covered with blood. Which is to say, the installation by the Pakistani artist Imran Qureshi intentionally resembles the blood spattering that results from a suicide bomber’s detonation in a crowd. The work is a response to bombings in Lahore, Pakistan, where in the cool of a July evening as crowds gathered at a Sufi holy site, three suicide bombers - who considered said crowd insufficiently Islamic - killed themselves and fifty more, while maiming two hundred.

In the museum label, Metropolitan curators did not hesitate to mention the blood many of us saw similarly splattered on television screens after the Boston Marathon bombing.  Such a reference seemed acceptable because within Qureshi's blood is beauty.  Inspired by a Mughal miniturare, Qureshi has painted delicate foliage within the splatters.  I slipped up to the Met's roof the week that Qureshi’s installation opened, and had the exhibit essentially to myself.  It was beautiful, in a certain way.  I thought, what a perfect discussion point at an art and justice conference.  Theoretically, I supposed this could help someone work through such a catastrophe.  Had one witnessed the bombing, perhaps one avenue of healing the memory would be to confront it - to imagine it beautiful.  "Yes, these forms stem from the effects of violence,” says the artist, “but, at the same time, this is where a dialogue with life, with new beginnings and fresh hope starts." 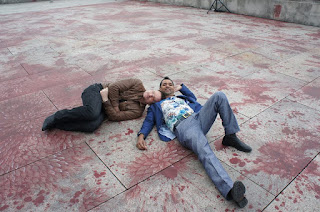 Having now had time to think on it, I'm not so sure.  Yes, this is an attempt at overcoming brutality, but the beauty is comparatively mute. I tried a thought experiment.  What if my ten-month-old daughter had been killed in such a bombing?  Would I want to see any beauty in that blood?  Googling around about the exhibit, I came up with some photographs taken when Bono showed up at the opening, in which he prostrated himself with the artist for a zany, "so fantastic!" pose.  Again, had people I had loved fallen in such a suicide bombing, two prostrate bodies surrounded by red paint might have been a bit too reminiscent of the original event.  I also noticed that the roof garden’s Martini Bar is offering Gola Gonda, “Traditional Pakistani Shaved Ice with Choice of Pomegranate, Rosewater, or Mango Syrup over Vodka.”  Enjoy a Pakistani beverage as one meditates on the same country's sickening catastrophes?

The more I considered Qureshi’s work, the more ingenious and bold it seemed to me, but also the more dissatisfying it became.  In the face of real evil, such muffled gestures of beauty seem powerless, perhaps even making the exhibit a case of false beauty.  Qureshi's adornment seems inadequate because it fails to fully grapple with, let alone counter the evil of the event that inspired it.  There are other artistic responses to violence that seem to understand exactly this.  Lebanese artist Walid Raad has intentionally responded to political tragedy with blank spaces, what has been called a “language of disappearance.”  His artistic reaction to Lebanese violence in one instance was nothing – a deliberate, focused silence.

T.J. Clark made a similar point in a paper at the University of Chicago this last year.   In a talk on “Capitalism without Images,” the noted Marxist art historian surveyed the London riots and the fading Occupy movement, and appeared to conclude that the best response to the regime of advertising was no images at all.  Clark suggested that one cigarette advertisement was a warped image of the Annunciation, but he offered no real Annunciation in its place.  A wheatpasted anarchist tract on a telephone pole was all he could offer in response to visual injustice, which also seems (in my estimation) comparatively helpless.

Is there really justice in any of these responses – Qureshi’s hermatological ornamenent, the silence of Raad, or Clark's anarchist punt?  As I continued to reflect on what my response to losing a daughter in such a bombing would be, I’m afraid I began to sympathize with the motivation of those who resort not to art, but to violence.  If I had seen the blood of someone I love – a creature whose creation in the image of God I was particularly sensitive to – so casually spilled, I would be happy to put beauty aside and seek balance instead.  If the perpetrators were so numb to the significance of human life, an appropriate reminder might be for their blood or the blood of someone they loved to be spilt. This is justice: An eye for an eye, a tooth for a tooth.  Such is the motivation of the main character in Homeland – the only just response to dead Iraqi children is dead Americans.

I know of no theology of suicide bombings.  It initially seems something foreign to Christian tradition, something for other religions to grapple with.  But just this morning, Andrew White, the Vicar of Baghdad, pleaded for prayers as scores were killed from two suicide bombs in Iraq.  Of course, it is a Christian issue, for the suicide bomb stands in our global culture today as the cross once did to first century Romans:  A foremost spectacle of gruesome "justice."  Far more shocking than any suicide bomb theology would be the idea that the Christian God is incapable of grappling with tragedy on this scale. But He is - and the first Christian thing to say about it is that Christ suffers with the victim of every such event.  The New Testament even leaves room for us to say he mysteriously is every victim.  "Whatsoever you have done unto the least of these you have done unto me."

But another way to understand suicide bombs requires falling into the well worn grooves of an old evangelical path, however unfashionable it might be.  The one who seeks justice is right.  The answer to evil and atrocity of a suicide bomber is not a vague gesture of beauty.  The answer is that innocent blood did have to be shed to make it right.  The divine response to the abyss of evil unleashed in by three suicide bombers is an even more devastating, atoning detonation.  “For this reason the Father loves me,” says Jesus, “because I lay down my life that I may take it up again. No one takes it from me, but I lay it down of my own accord.”

But in this blast there was only one victim, who absorbs the impact for all of us, thereby exonerating multitudes of the guilty, even – should they ask forgiveness – the bombers themselves.  Why do bad things happen to good people?  R.C. Sproul’s answer:  “That only happened once, and he volunteered.”  And here, of course – only after innocent blood atones - is where beauty does properly come in: the beauty of every crucifix.  Because it alone fulfills the requirements of justice, only Jesus’s shed blood can be beautiful, and only in view of that blood can Qureshi's art be taken in.  Fortunately, such beauty is on offer in abundance at the Met in the countless crucifixes and passion scenes just beneath this provocative installation, images which will be there long after the current commision is replaced by something that goes better with rooftop Martinis.
Posted by millinerd at 4:03 PM