"Our Aim in the Undertaking is to promote the Interests of the Redeemer's Kingdom," explained Jonathan Dickinson, the first President of the College of New Jersey (now Princeton University).  A refusal to deal seriously with such university origins is not dissimilar to the refusal to deal seriously with the origins of the universe: the six day creationist's naive hope that present realities magically dropped out of the sky.  In College, What it Was, Is and Should Be, Andrew Delbanco puts it this way:


To anyone even glancingly acquainted with the history of American education, it is hardly news that our colleges have their origins in religion, or that they derive their aims, structure, and pedagogical methods mainly from Protestantism...  Many academics have a curiously uneasy relation with these origins, as if they pose some threat or embarrassment to our secular liberties, even though the battle for academic freedom against clerical authority was won long ago.  If you were to remind just about any major university president today that his or her own institution arose from this or that religious denomination, you'd likely get the response of the proverbial Victorian lady who, upon hearing of Darwin's claim that men descend from apes, replies that she hoped it wasn't so - but if it were, that it not become widely known.

This is a pity and a waste, since there is much to be learned from the past, including the clerical past, about the essential aims and challenges of college education.  We tend not to remember, or perhaps half-deliberately to forget, that college was once conceived as a road to wealth or as a screening service for a social club, but as a training ground for pastors, teachers, and, more broadly, public servants.  Founded as philanthropic institutions, the English originals of America's colleges were "expected," as Morison put it, "to dispense alms to outsiders, as well as charity to their own children (pp. 7-8) 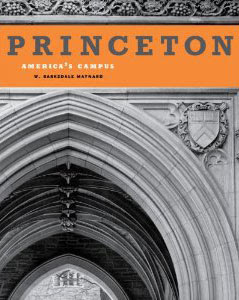 That these founding ideals might ameliorate the present crisis in higher education is one suggestion of Delbanco's book.  What W. Barksdale Maynard's Princeton: America's Campus accomplishes (among many things) is to show that Collegiate Gothic architecture once did just that.  By replicating the English Gothic of Cambridge and Oxford, Princeton resisted the secular German research ideal (Wissenschaft over Bildung) that had overtaken American education starting with Johns Hopkins, and renewed its original commitment to the liberal arts:


[One] plus for Gothic at Princeton was its religious tinge: a churchly, monastic quality suggested a bulwark against secularism, especially appreciated by the many ministers on the faculty and among the alumni (fully one sixth of the graduate were ordained).  "Princeton's crowning merit," said a reporter [in Harper's Weekly, 1887], "is that it can keep pace with all the learning and progress of the age without yielding to the encroachments of modern unbelief."  Parents could trust that their sons would learn the most advanced subjects and approaches "without sacrifice of those principles which are inculcated in the Bible... Its founders and upholders have pledged themselves and their successors to be true to that religion which has been faithfully taught here from the beginning."  Tigers celebrated their "loyal adherence to the sturdy, unsectarian, evangelical Christianity which is synonymous with the name of Princeton."  No style could better connote this time-honored and pious approach than Gothic (p. 82).

But if one can't afford, or does not prefer, the Gothic - another tack would be to simply reexamine founding ideals as one ingredient to present renewal - perhaps by reasserting Dickinson's motivation with a motto like (to choose one college at random) For Christ and His Kingdom.

(More on this subject to come, by the way, in a forthcoming issue of Books & Culture.)
Posted by millinerd at 5:39 PM