If Preziosi only takes us to the frontier of post-secular art history, what would it mean for a younger generation to enter in?  Consider that supposed stronghold of religionless resistance, that well-defended fortress of secular subversion, forever issuing impious phalanxes of the atheistic avant-garde, the Dada.  Certainly they can be trusted to keep the cult out of culturati.  But in Leonard Aldea's hands (The Implicit Apophaticism of Dada Zurich: A Spiritual Quest by Means of Nihilist Procedures), Dada is less a vehicle for nihilism than a chapter in the history of apophatic theology.


Just like apophatic theology, the apophatic art of the Dadaists deﬁnes its object of knowledge exclusively by saying what the object is not, never by stating what the object is. In doing so, each negative deﬁnition is a step forward toward that ﬁnal afﬁrmative statement, although it never carries positive information about it.

This is not a case of theology retreating to the tame suburbs of critical theory, instead it is the elevation of theory to a highrise loft in the City of God.  For theology is evidently the origin (paging Holsinger) and destination of theory's restless striving.  Dada's apophatic art, however, needs be nestled within a cataphatic, declarative moment (an essential lesson for theologians and artists alike).  Even Marcel Duchamp, suggests Aldea, was an inconsistent nihilist, for "he never actually stopped explaining that nothingness... never stopped using this very nothingness to create with."  To say nothing of the founder of Dada, Hugo Ball, whose diary for July 31, 1920 insists that “the great, universal blow against rationalism and dialectics, against the cult of knowledge and abstractions, is: the incarnation.”  Aldea sees Dadaism as not an attack on meaning, but "the bastion of human dignity in an age when humanity was extremely devalued and reduced to the empty carcasses of the many theoretical systems that saw their failure in the reality of the First World War."


Once the nihilist stamp is removed from our perception of Dadaists, and their techniques are looked at and assessed from an apophatic perspective, future research into the intrinsic theology of this most proliﬁc artistic movement can address a number of other, more in-depth questions. 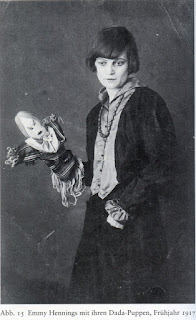 Aldea's article is just a beginning, and his thesis is confirmed - as he alludes but does not explore - with Ball's conversion with his wife Emmy (let's not forget her!) to Catholicism (a bit more on that from me here).  Aldea points to the need for further research, and indeed the most immediate necessity is for someone to increase the accessibility of Ball's writings on Byzantine saints (the original avant-garde) by translating Byzantinisches Christentum: Drei Heiligenleben (1923). Furthermore, if religion necessarily muffles resistance (as Preziosi assumes), then why does Ball's attack on German nationalism only increase after his conversion, as evidenced by his 1924 Die Folgen der Reformation (reminiscent, incidentally, of Brad Gregory's The Unintended Reformation).

Some German theologians have made these connections already. Notably, however, Aldea concludes his exploration of Dada not by exposing art history's limitations, but theology's.


Almost a century after Dada appeared, modern scholarship has failed to investigate these intriguing connections between the art, theology and philosophy of the beginning of the twentieth century. Even more frustrating is that, outside the world of art historians, the theological and philosophical ideas behind Modern Art are still being read with the interpreting tools used for representational art, although we quite clearly deal with an entirely new phenomenon. Art is still expected to be, and interpreted as if it were, merely the visual reproduction of previously formulated theological or philosophical thought, and not a source of original thought in its own right. The Avant-garde brought to the foreground the discrimination between two theological methodologies, the written and the visual, and also the idea of a theology developed and expressed through the arts. The risk of such discrimination against Modern Art, especially among theologians, is that by our refusal to at least consider art as a proper methodology for original theological investigation, we may in fact reject an authentic source of revelation.

Which returns us to that previous question:  If (according to Preziosi) "Art [is] the very esperanto of European hegemony," then why perpetuate the odious oppression of art history?  Because while Preziosi is right to have exposed art history as a hegemonic tool of the West - it is not only that. Should the discipline reach back to its repressed origins far before the Enlightenment or Renaissance, the icon's role in resisting such a narrative emerges.  Art reveals itself as theology (paging Andreopoulos).  And while this may long have been so,  only recent developments in the (not hopelessly hegemonic) discipline of art history have permitted such ocular epistemology to unfurl.  Only with the grinding of this particular lens of investigation has art's theological dimensions to come more fully into focus. 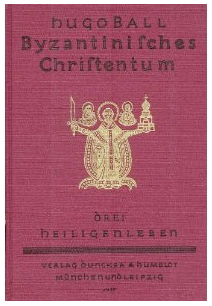 This is where the "theology and art" genre - a laudable venture to be sure - goes wrong, with its chiefly philosophical, as oppose to art historical, conversation partners.  It frequently fails to familiarize itself (as do many visual theology enthusiasts) with the disciplinary vehicle that most privileges the noblest of the senses. How many theologians, for example, have even heard of Alois Riegl?

That said, the visual cannot remain disjoined from the verbal anymore than can apophatic from cataphatic theology. “The word and the image are one," wrote Hugo Ball, who knew his New Testament and ecumenical councils well enough to percieve Christ as both logos and eikon.  "Painting and composing poetry belong together. Christ is image and word. The word and the image are cruciﬁed.”  For this reason, as awkward as neologisms can be, we might call the territory being described here as theography, because in Byzantine Greek, the verb graphein encapsulates both writing and drawing.   Art history, an admittedly verbal discipline that nevertheless serves the visual, exploits this symbiotic insight.  There are innumerable theological questions that would be recast - if not resolved - through a rigorous, up to date art historical investigation alongside more routine verbal ventures.

Theography, for lack of a better term, is not the only future of art history, but it is one of them - and to foreclose this possibility would be to artificially limit the interpretive dilation that critical theory and the visual culture debate of the nineties allowed.  If it can be done with Dada, it can be done with myriad artistic movements more.  Make no mistake, art's theological potentialities also mean that art has, does and will operate as very bad theology too.  But the grander point is that the secret of art history, or at least another of them, is that the discipline does not take its place under the queen of the sciences, but participates in her reign.
Posted by millinerd at 5:18 PM