It is frequently remarked that the best question to ask an atheist is, "What kind of God don't you believe in?" After a description of a Mr. MaGoo who lives behind Saturn, a celestial masochist or a cosmic killjoy, the natural response from a believer remains, "I don't believe in that God either."  The same goes for a someone casting off the burden of "metaphysics," to enter the brave new world of post-ontological Christianity.  It all sounds very bracing, until one asks the individual what kind of metaphysics he (I would say, "or she," but anti-metaphysics is very guy-centric) doesn't believe in.  What frequently follows is something like Heidegger's critique of supposedly static medieval ontology, to which the proper response remains, "I don't believe in those kind of metaphysics either."


Could Heidegger have read Dionysius or Maximus, speaking of God as the fullness of being, "leading" (to use the Dionysian term) being into being, or as the light that shines in and on all things and draws them to himself, or as the infinite source of beauty that "excites" the "eros" of beings our of their nonbeing, and interpreted this simply as a discourse of double founding, a mere causal economy between a supreme thing and derivative things?  Could he have encountered Dionysius's language of the divine ecstasy that calls forth and meets our ecstasy, and so gives being to beings, or of the Good's supereminnet "no-thing-ness," and treated this too as a form of ontic causality infinitely magnified, without significant analogical ambiguity?

That quote from the book that I use to chase away the haters.  Now that it's just you and me, I can point out that Hans Boersma's Heavenly Participation (which I explore more extensively in a B&C review) is a sort of Beauty of the Infinite for evangelicals, in that it finds its chief inspiration in the Christianized Platonism of the first millennium.  Boersma's book is destined to be misunderstood,  even as it offers - however imperfectly - one of the best possible evangelical futures by allying evangelicalism with the past. 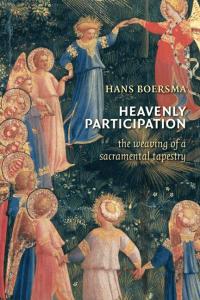 When people reject the Great Tradition because it supposedly limits God under a totalizing metaphysics of being, they forget (if they ever knew) that the exact opposite was the case.  Consider this statement from Gregory of Palamas which brilliantly encapsulates being in the Patristic key:  "He Who Is is not produced by essence, but essence comes about from He Who Is; for He Who Is embraces all of being in himself" (Triads, 3.2.12).  When people reject "participation" because it blurs the divine/creature distinction, they forget (if they ever knew) both the Biblical testimony and axiomatic assertions like this from Cyril of Alexandria: "If we say, we are united with God, this does not mean that our nature is changed into the divine essence; rather, we are united with God through grace and virtues" (PG 75, 205C).   When people reject the Great Tradition because it supposedly over-privileges the created order, they forget (if they ever knew) Maximus the Confessor's claim that "He has become man in order to restore and renew the world, not to contribute to its [natural] immanent perfection.  For the Word dwelt in the flesh among men, not because of the laws of nature, but according to the [freely determined] economy of salvation" (PG 91, 517BC).  But just as Heidegger was not well versed in Patristics beyond Augustine, neither are many contemporary anti-metaphysicians.

And yet, what Boersma calls the "Platonist-Christian synthesis" could itself be called anti or post-metaphysical because of how radically it revises classical metaphysics - and calling it that might increase its fashionability.   Indeed, according to Hart's contribution in the go-to volume on the subject, "The analogia entis...  introduces an unclosable ontological caesura into what mere metaphysics treats (quite unconsciously) as a seamless ontological continuum.  And this is the interval of being that lets us be as the creatures we are, that sets us free from our 'own' ground."  In that sense, the analogy of being is the aboriginal "anti-metaphysical" declaration, and The Beauty of the Infinite - because it "reject[s] the metaphysical assumptions of postmodernity," is a post-metaphysical book as well.  Notice how Hart, not through his own genius but by eloquently repristinating the tradition, transcends the classical metaphysics of Aristotle and Plato:


Christian thought from the time of Gregory of Nyssa, Dionysius, and Maximus had developed an ontology of the infinite (drawing on Plotinus's thought, while freeing it from its metaphysical identism) which Aquinas, in the West, brought to a particularly lucid expression: being is not to be thought of in terms of either essences or their finite existence; the "infinite," which for Aristotle named only the inchoate potentiality of matter apart form the limit of form, now names the fullness of being, esse, which is the transcendent actuality of essence and existence alike... We are far beyond any naive essentialism here.  The language of participation, however much one may wish to resist it, cannot (except as a display of doctrinaire cant) plausibly be called onto-theology.

The God who is infinite and no being among beings is also the personal God of election and incarnation, the dynamic, living, and creative God he is, precisely because being is not a genus whereunder God as a "a being" might be subsumed...   God is always "being God," transcendent and yet present as the one who is and shows himself, indifferent to metaphysical demarcations between transcendence and immanence, infinity and finitude, being and beings: precisely because God transcends and makes possible these categories, in their being, he inhabits them simultaneously without contradiction...  God exceeds beings as the ever greater, the more beautiful, radiant, and full of form, and so the ontological difference cannot limit what is said of him: for it is merely the contingency of that quantity, its freedom as expression, bounty, and gift (which is what being always already is).  The Trinity exceeds being, not like a Neoplatonic monad dwelling beyond being, but by comprising being in the essential act of triune love.

Hence Hart (and Boersma) can be considered vigorously post-metaphysical, if the metaphysics in question are Greek.  To further blur the boundaries, perhaps Kevin Hector's hot-off-the-press Theology Without Metaphysics could be considered pro-metaphysical because he begins with a very important nuance:  "I am by no means suggesting that everything that goes by that name [metaphysics] is to be rejected." Confusing as this all may be, another Kevin lays out the scenario quite clearly:  The existence of "bad metaphyisics" that "imposes a system of categories on God without attending to God's own self-communication," and which postmodern thought rightfully dethroned, does not rule out "good metaphysics" that submits to that self-communication.  And it was exactly this kind of good metaphysics that, so far as I can see, comprised the Patristic consensus, and which - so I argued in the aforementioned review - infuses Protestantism as well.

Many are bravely launching ahead into the post-metaphysical rapids, proudly jettisoning Chalcedonian "baggage" and permitting ecumenical prospects to recede further into the distance with nary a glance of regret.  The excitement comes from exploring the unknown, and the chance to perhaps be the first to set foot on terra incognita of historical theology.  But I'm not sure this terra is as incognita as we might think, as history already offers a Christology without a metaphysics of participation.  It's called Arianism (which denied any ontological continuity between Father and Son).   But who am I to be so dismissive?  Perhaps there are thousands of potential converts waiting outside church doors, impatiently pleading: "Abandon metaphysics in any form we'll instantly subscribe to Christianity!  It's the one thing holding us back!"  Sound like anyone you know?

A few years ago, Timothy Larsen's review of some new books on the Pre-Raphaelites concluded with a potent suggestion:


Despite all the faux bravery of our endlessly proliferating "post"-movements, it strikes me that it would take far greater courage in our day for a few hearty souls of real intellectual mettle to pursue some daring "pre"-experiment.  The Pre-Raphaelites knew that it is harder to recover what was good in the past than to deride what was bad.

Fortunately, Boersma's book, alongside many other similar publications, centers and conferences, means that more than a few evangelicals are taking up Larsen's challenge.  Meanwhile, metaphysiphobes might consider Boersma's:  "Usually the ontology of those who plead for the abolition of ontology turns out to be the nominalist ontology of modernity." Why? Because there's nowhere left to go. The great anti-metaphysical revolt already happened: It's called the Christian faith.

Posted by millinerd at 1:38 PM