After the Color Wars

Surely you've heard about the upcoming conference: Thomas Aquinas and Karl Barth: An Unofficial [thank goodness] Protestant-Catholic Dialogue (register here).  One problem with such exciting, if necessarily donnish, debates is that they require nothing less than full time scholarly devotion to follow along, let alone the decade (at least) of study necessary to actually contribute to the discussion.  But as an art historian, at least I can analyze the conference poster's graphic design.

I've seen a good many such posters in my day (lately 60-70% of which seem to be for religious lectures at this supposedly "secular" University).  This, however, is one of the finest.  It both arrests the eye and pleases it, captures attention and intrigues.  Leaving aside the Barth or Thomas only bootleg editions, let's analyze the version depicted here:  Barth's color, I'm convinced, is more than a pedantic evocation of the "red pastor of Safenwil."  Together, the red and blue theme conjure the color alignment of American political divisions, which are not entirely dissimilar to the (infinitely more civil) conversations between (some) Barthians and Thomists. Barth and Thomas are occasionally presented as the only truly comprehensive Christian alternatives.  For many Catholics, there's a significant extent to which Thomas has to be proven right.  Notice that Aeterni in Aeterni Patris.  And if for Barth, “theology will really be theology...  when from beginning to end it is christology" (61), then Barthianism becomes (for some) the closest we've ever been to real theology since the Bible itself.  Such options - combined with intelligence, education and time - result in well-equipped authorities for both parties, providing residents of either camp with considerable reserves of argumentation with which to bolster their predetermined alignments.  True blue and crimson red. These colors don't run.  More on this below.

Another wise visual choice was to give Thomas the traces of a radiating nimbus. Contemporary Thomists, having absorbed (so far as my shelf-perusing can tell) aspects of Henri de Lubac's symbolic (as oppose to dialectical) theology, have given the Angelic Doctor a patristic facelift, justifying the poster giving Thomas a medieval sheen. Dominicans follow suit by frequently sporting appropriately medieval white habits.  Barth, however, wears appropriately modern eyeglasses in the poster, and smokes.  Many Barthians do both as well.  And yet, the little tuft of hair on Barth's head, threatening to elongate into medieval radiance, hints at the more sacramental, ressourcement Barthianism to come.

The next deft design manouever was to print the date of the conference in red, showing that this time - unlike the Analogia Entis conference - Barthians have the home court advantage.  Such an advantage worked well for the D.C. Thomists back in 2008.  Barth's "invention of the anti-Christ" quip, mind you, is no longer on the table.  McCormack successfully contextualized it away, showed it to have been directed against Protestants, and he developed the very idea he hinted at a decade ago (see page 109), namely that Barth has his own very distinctive analogy of being (a case which KJ, you'll recall, has sealed).  I'll spare you my lauding the other essays in the formidable volume because it would annoy those who disagree with me on this, but suffice it to say, it is no longer a question of whether or not one has an analogy of being, but which one.  Ecumenical dialogue at such conferences, in other words, works. 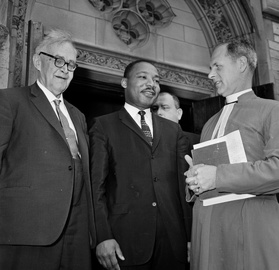 How will this home-court advantage work for the Princeton Barthians?  Blooming Washington may have made an irresistible case for the analogy of being, but so does Princeton regarding this conference's ecumenical aim.  Thomas and Calvin, you'll recall, are already in dialogue in the Princeton University Chapel - where Barth himself preached. There he is with MLK, but note the architecture.  He's appropriately standing on the Chapel's south, Protestant, side (obviated by the south window's dedication to Bunyan's Pilgrim's Progress and Milton's Paradise Lost).  Conversely, in the early twentieth century, long before ecumenism was fashionable, Princeton hosted the (once) famous Thomist, Cardinal Mercier, who is himself honored with his own window, appropriately placed on the north, Catholic side (indicated by Malory's Morte d'Arthur and Dante's Divine Comedy).  Pace Jason Byassee's fine article on a crucial building, Princeton (you've tired of hearing me say) lays claim to one of (the?) finest ecumenical chapels in the world, making this town - following Princeton proposal precedent - an ideal venue for such discussions.  And whereas Barth may have been here, Thomas is.  An authenticated relic of Thomas Aquinas (a spinal fragment, I believe), safe in Catholic custody and awaiting the resurrection, won't be far from where the conference takes place.

As blue Thomists and red Barthians courteously campaign, will some kind of imperfect purple compromise or Green Party candidate emerge?  This would be understandable, even necessary.  When Summa question 13's analogical mean between univocity and equivocity is genuinely grasped (ironically, by yielding mental grasp), it appears increasingly inevitable, regardless of who gets the blame for the analogical perspective's consequent dissolution, or exactly where one identifies the pre-modern/modern divide.  Univocity clings to the epistemological red balloon, equivocity pops it, whereas analogy faithfully releases said balloon into God's infinite blue sky above.

On the other hand, when one reads enough Barth to absorb his account of election, sensing its vertiginous beauty, the way it transcends alternatives and answers serious historical problems (Protestant and Catholic), it's hard not to feel the gravitation pull of the Church Dogmatics.  Drawn by both Thomas and Barth in this way, must we intentionally sacrifice one of them, forging a consistent position for the sake of sanity?  Or, can we affirm them both, nursing the consequent dissatisfaction in Radnerian fashion, bearing the splintered cross of Christian division for the sake of a unity yet to come?

And what about the Orthodox, who don't get included in these discussion as much as they might?  After all, in significant ways, the Orthodox are the "source" in ressourcement.  Granted, Orthodox colors tend also not to run.  But the Barthian touchpoints at the recent Patristic Doctrine of the Atonement conference were downright eerie.  Among Orthodoxy's modern representatives, does Bulgakov emerge as the middle ground between Barth and Thomas, with his remarkably "Barthian," possibly even McCormackian, view of election (though developed before Barth!), and a robutsly analogical perspective (notwithstanding his admittedly risky sophiology)?  And what of Radical Orthodoxy, which - while cool towards Barth - lionizes Bulgakov (alongside de Lubac) as one of the two "truly great theologians of the twentieth century" (104)?

Then comes the dark horse candidate of ressourcement evangelicals (to be distinguished from Milbank and co.), which muddle the colors even more.  If Henri de Lubac is for evangelicals too, what happens when his criticism of Thomism's nature/grace distinction strangely aligns with Barth's chief concerns?  "One wonders," once mused Robert Jenson, "if de Lubac ever realized how close his positions are to those of much Reformed theology, notably those of Karl Barth” (67).  We need no longer merely wonder, however, as Kenneth Oakes has cautiously spelled out the undeniable parallels, which continues (for me at least) to be big news.  One doesn't need a Ph.D. in theology to intuit the connection between Boersma's Heavenly Participation and Adam Neder's wonderfully clear study of participation in Christ according to Barth, which ends (I remind you) by putting Barth in dialogue with Orthodoxy.  More of this, please.  Hans Boersma, focusing as he has on Catholicism, may not have explored these connections fully, but he has left them open, wise enough as he was not to burn the Barthian bridge.

All this, again, is by way of complimenting the poster, whose stark primary color alternatives beg for some kind of (hopefully not just eschatological) blend.  A general pre-modern downshifting can be discerned across communal lines, even while some choose to recklessly accelerate into a vague and unwelcoming (post-Christinan?) future.  The ecumenical potential of 1) patristically-corrected nouvelle théologie Thomism (see Mansini on that), 2) an increasingly sacramental Barthianism, 3) Eastern Orthodoxy in toto, 4) the Radical Orthodoxy instinct (more than its tone) and 5) ressourcement evangelicalism, is not uninteresting.  Such an alignment threatens to fill the secular disenchantment laid bare by Charles Taylor, Talal Asad, or (more recently) Glenn Olsen.  Perhaps this is the purple we're looking for.  If so, said conference seems the most likely way of finding out.
Posted by millinerd at 8:36 AM