To find the now ubiquitous Starbucks symbol, an early company partner, I am told,


poured over old marine books until he came up with a logo based on an old sixteenth-century Norse woodcut: a two-tailed mermaid, or siren, encircled by the store's original name, Starbucks Coffee, Tea, and Spice. (33). 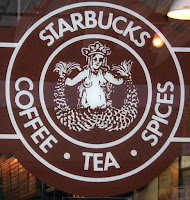 She became the siren (a.k.a. melusine, mermaid, lorelei) of caffeinated delight, "bare-breasted and Rubenesque... as seductive as coffee itself" (ibid). Starbucks found it expedient to slowly conceal the reference over time - but it's still there, and has even been revived with the Pike Place brew resurgence. Tempting as it may be to use this connection as opportunity for an Utne reader rant on how the seductive corporate monster will lead our otherwise innocent race to shipwreck on capitalist shoals, I have chosen to this time quiet my inner Adbuster and seek a more interesting interpretation:

The siren symbol of course goes much further back than a 16th century Norse woodcut. Aside from their cameo in the Odyssey, sirens often showed up in Medieval Cathedrals where they bear a very close proximity to the Starbucks design.

As one might imagine, these great grandmothers of the coffee temptress were more than just decor. Keeping in mind that sirens seduced to kill, a mermaid with tail spread open was an (not entirely subtle) indicator of the dangers of sexual temptation. Medieval carvers who knew of the popular Bestiaries would have known exactly what they were up to. Explains one art historian,


Sirens, the most common hybrids to be included in Romanesque sculpture, appear frequently in the context of the monastic cloister. The Siren owes its prominence here to Jerome's translation of Isaiah 13:21-22 in the Vulgate: 'But beasts reside there, and their places are filled with dragons, and ostriches live there, and satyrs also dance there; and they respond there with ululations in his places and sirens in the houses of pleasure.' Jerome's own commentary on the passage, as well as those of other Early Christian Fathers, including Ambrose, Augustine, and Paulinus of Nola (353/54-431), popularized the idea of the Siren as courtesan, the symbol of carnal pleasure (volumptas) and lust (luxuria)" (Art Bulletin 2001).

And therefore considering the natural habitat of the Starbucks imagery I make the following suggestion: Every time you see it, remind yourself, as would have medieval audiences, to be on your guard against sexual temptation in all its nefarious guises.

If word gets out on this, considering the symbol's planetary proliferation I predict a chaste earth by 2020.
Posted by millinerd at 11:41 AM