Toward a New Grail Quest 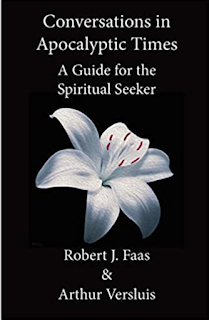 Even for those well-versed in Western intellectual history, to discover the scholarship of Arthur Versluis is to discover a hidden world. His great trilogy (Theosophia, Wisdom’s Children and Wisdom’s Book), appearing at the turn of the millennium, uncovered a neglected galaxy of Christian esoteric thought, one that could in no way be dismissed as “Gnostic” (whatever might be meant by that sloppily flung term), let alone as heretical. Versluis revealed that a term like “theosophy,” co-opted by Madame Blavatsky's Theosophical Society originally in opposition to Christianity, was in fact a far earlier experiential form of Christian spirituality that resurfaced at the dawn of modernity partly in order to defy it. Simply put, Versluis uncovered the very terrain that people leave Christianity to find within the Christian tradition itself. His scholarship is accessible, careful, extensive and original. Many who have worked through his books, or even a portion of them, will likely find themselves realizing that their education has been lamentably incomplete.

But just as importantly, Versluis comments at nearly every turn that what he has discovered, these experimental depths of Christian mysticism in the face of modernity, is as much a personal quest as it is an intellectual project. His readers will therefore be faced with a desire for more practical guidance, for a more free-wheeling, casual discussion about how to apply this forgotten, but still very much Christian, tradition to one’s own life. It is this precise need that the present book adequately addresses, offering a casually written and accessible series of conversations between friends. Versluis’ conversation partner is a respected psychologist, Robert J. Faas, who brings his clinical experience and highly informed speculative insight into play as well. The combination is perfect for meeting the book’s stated aim: a guide for spiritual seekers in apocalyptic (that is, revelatory) times.

Faas and Versluis here show, with charity and clarity, how certain levels of approach are in themselves incapable of extracting us from our increasingly toxic twenty-first century predicament. Still, they do so while honoring the truths each of these “levels” (for lack of a better term) contain. To attempt to summarize the book, I will outline what I discerned to be these respective levels. Of course, some might fear that even to mention “levels” of approach would be to betray an elitist Gnostic approach to spirituality; but this is not the case. Faas and Versluis are too respectful of each level, and too insistent on the unique dimensions of Christianity, for that facile critique to validly apply. With that said, here are the levels I discerned:

1) First off there is the materialist approach to reality, which can include the academic mode. One can investigate spiritual and religious traditions (or anything really) from this purview, possibly declaring such traditions to be false, or (for the more restrained academics) observing and describing the religious quest with as much neutrality as possible. But while this book assumes a great degree of competence in this area, it is deliberately not academic. And while both thinkers give due weight to the material plane—to sexuality and ecology, for example—without too quickly venturing to the spiritual, both thinkers argue that our civilizational prospects without spiritual renewal are dire, especially due to purgative forces coming from the Right, but just as much so – both thinkers are keen to point out —from the silencing zeal of the political Left.

2) Then there is the more adventurous psychological approach. Think, for example, of a Jungian mode that recasts entire religious traditions in the interior key. Both thinkers are deeply appreciative of Jung for the doors he has opened, but both are far too versed in the history of mysticism to be deluded (as are too many Jungians) into thinking that Jung’s take on the alchemical and mystical traditions is always to be trusted, let alone considered as their source. Indeed, Versluis’ entire career has done so much to expose the (often unabashedly Christian) sources that Jung drew upon, liberating readers to go to them directly, unfiltered through a Jungian lens. A psychologist like Faas, it seems to me, therefore finds himself in the great tradition of Christian interpreters of Jung (Sanford, Bryant, Ulanov) who are appreciative but not beholden to the great Swiss psychoanalyst.

3) Next we might describe the traditionally religious approach that resists psychologizing, and asserts that standard doctrinal boundaries can avoid the difficulties of the materialist or psychological approaches. Faas and Versluis both understand this. Still, they know that in and of itself merely cognitive religion can also become a dead end. Both thinkers appear to be (in my reading at least) genuinely Christian mystics, ones who are perfectly straightforward about – for example – the resurrection of Christ; but they also urge their readers to experience this reality as well, liturgically and internally, and recommend unexpected ways of doing so. The Eastern Orthodox tradition therefore is especially pronounced.

4) Next we could summon the perennialists: Those who think that all religions can be freely sampled and distilled to a common denominator without committing to any one of them. Faas and Versluis see the insights of the perennial philosophy, and show deep knowledge, appreciation and respect for the great traditions. While they can affirm this approach to an extent, at the same time they claim that Christianity offers something unique, especially when understood as fulfilling the Mystery Traditions that came before it. As Faas puts it in one remarkable passage:

What did Christ bring into the underworld that was different than what the earlier Mysteries had been able to do? It’s really quite a central question because something changed in the very nature of the underworld. Christ’s descent was not like an Orpheus or otherwise who have descended and then in a sense came back – Christ overcame…. It wasn’t just a pivot to the underworld, it was an overcoming and a change of its nature forever.

The problem, however, comes when in fulfilling and transcending the Mystery Tradition, Christianity leaves Mystery entirely behind. Faas and Versluis show us how to regain it.

In short, having absorbed the lessons of each of these preceding levels (which I have unimaginatively labeled one through four above) Faas and Versluis transcend them. While “transcend and include” has become something of a cliché, or even an unearned boast in adventurous spiritual circles, one senses that these two friends have earned the right to the phrase. Each of these conversation partners are themselves conversant in the Christian mystical tradition (not to mention Buddhist, Hindu and Sufi traditions), with a special love for how the Christian mystical tradition was modernized with Jacob Böhme.

While a more academic, descriptive approach to this great German mystic (and his followers) is available in Versluis’ many books, this publication is more immediate and practical, harboring no illusions about our tenuous moment. Finally, both thinkers are fully cognizant of the mystery of unearned grace, but they know that a process is necessary as well, one that so many current churches have forsaken (but which endures, for example, in the Spiritual Exercises of Ignatius of Loyola). Faas and Versluis, however, commend instead the Grail tradition, not to mention Christian alchemy (and the two are closer than one might think). Indeed, the true alchemist – according to Faas – is Christ himself.

This is a highly recommended conversation that everyone, no matter which of the aforementioned levels they gravitate toward, would do well to hear.

Posted by millinerd at 8:12 AM