The Kind of Faith an Artist Had Better Not Lose

The New Republic has been bought out, Rolling Stone has been discredited, and millinerd.com has resorted to extended blockquotes. Really, really good Christian Wiman blockquotes. 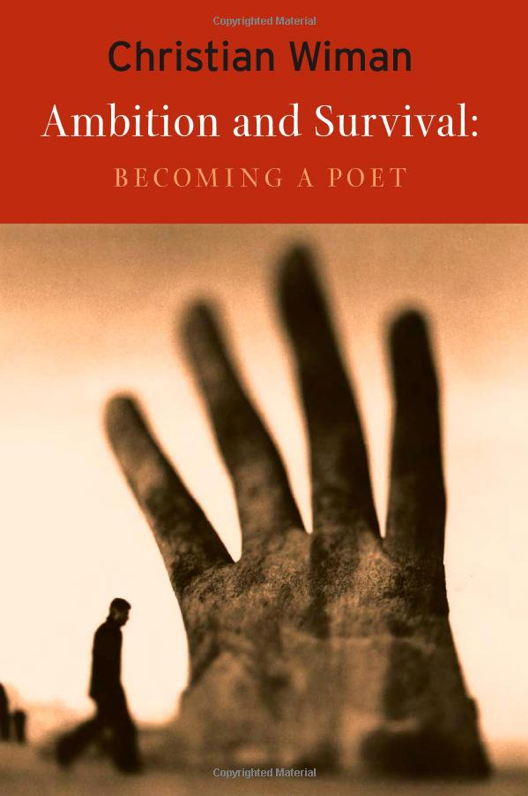 "Grace fills empty spaces," writes Simone Weil, "but it can only enter where there is a void to receive it."

Whatever one thinks of the religious implications of that sentence, there is a kind of faith that a poet had better not lose. It is a faith in the mind's ability to find meaning in a world that exists indepedently of itself, and a concomitant faith in language to serve as a means of doing so. In the absence of this, poetry can only be at best a diversion within life; at worst it is a complete evasion of it. Yet even for those poets who manage to retain such faith, who in their better moments believe in the value of poetry and in its capacity to formalize some fragment of living reality, the prospect of spending a life trying to articulate sweet sounds together ought to be fraught with doubt and uncertainty, some unshakable sense that, in the face of real suffering and chaos, poetry may be irrelevant.  It is this tension that keeps talent alive.

It is also this tension that keeps form alive. The least satisfying forms are those that are the most satisfied with themselves...  Those who merely imitate the order they see around them are ornamentalists.  There are pleasures to be had from such work, but they are the pleasures of amenities. At the same time, formal distortion is interesting and meaningful only when it occurs in a poet for whom formal coherence seems a real possibility... It requires no great talent to imitate chaos, or to illustrate the inability of the mind and language to make meaning. Those who do, as Wallace Stevens suggested, are simply exacerbating our confusion.

This structure of ideas, these ghostly sequences
Of the mind, result only in disaster.  It follows,
Casual poet, that to add your own disorder to disaster

Makes more of it.

I have not intended this to be an argument in favor of a "return to traditional forms." Much of the self-satisfied metrical poetry I read makes me nostalgia for Dada.  I have focused on these forms for the sake of clarity and economy, and because they seem to provoke the strongest animus. I do feel that, whether one writes in traditional forms or free verse, it's probably time to get beyond this automatic resistance to finish and closure in poetry, that the idea of form as somehow more authentic if rough and unfinished has itself become something of a convention. If one's experience of life is truly confusing and chaotic, and if one's feeling for the inadequacy of language is something more than an academic idea, perhaps the proper response is either silence or coherence.  Not the kind of coherence that eliminates uncertainty, not the kind of closure that congratulate itself, but something sharper, some only momentary peace which, because it comes with a consciousness of loss, is also pain.

I owe this reference to the sage of Lincoln Marsh, Joel Sheesley, who has applied this creepily insightful passage to his own staggering paintings.   In the context in which he shared it, Sheesley explained how the supposed ban on traditional form is simply outflanked by Christian Wiman's wisdom, with which I now conclude:


My friend thought that to write in traditional forms was to cleave to a vanished past, to insulate oneself and one's work against one's own time.  I have tried to make a case for them as bearers of contemporary consciousness, though I do admit that one can't use these forms without referring to the past. So long as it isn't merely a sentimental attachment to the antique, I think of this reference as a strength.  I also think that there is a sense in which to work toward some ideal order is to claim a connectedness with the future as well as the past, that a poem may foreshadow formally a time in which one's world and mind will - and I'm paraphrasing Marilynne Robinson here - be made whole.  To reach for is not to grasp.  ...I think perhaps the poems that I've been talking about in this essay were written by poets who believed utterly in an absolute formal coherence that - and this was part of their belief - did not [millinerd insertion: YET] exist. To experience such forms is to experience both consolation and provocation.  It is to come into a place of language that is easeful and unchanging and will not let you forget the fact that it is not a place. It is to be given an image of life that you have lost or long dreamed of, to hear as sound something of the farthest sorrows that you are, and to know in that moment that what you've been given is not enough.

On that seasonable note of waiting and expectation, I wish millinerd reader[s] a merry Advent!
Posted by millinerd at 4:47 PM