For the futurist edpunks of Do It Yourself University, the foundation of education in this country was a "pallid imitation of the fourteenth-century English and European curriculum, which itself was a shallow error-riddled reconstruction of the intellectual achievements of Aristotle, Plato, and Socrates."  Perhaps that's why colonial colleges produced dimwits like James Madison.

But Andrew Delbanco, in College: What It Was, Is, and Should Be, actually bothered to learn something about Puritan education, and sees it as a way to renew our own.  Delbanco even identifies the root of critical thinking in American education in the "Puritan principle that no communicant should 'take any ancient doctrine for truth until they have examined it.'"  And then there were the professors. 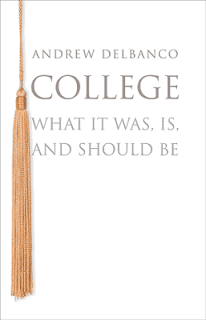 Puritans spoke almost indistinguishably about teaching and preaching.  Consider John Cotton, arguably the leading minister of New England's first generation.  In his history of early New England, the Magnalia Christi Americana (1702), Cotton Mather (Cotton's grandson), portrays him as a man whose religious faith and scholarly attainment are essentially one and the same. A "universal scholar, and a living system system of the liberal arts, and a walking library," he was the ideal to which every studious young person should aspire.  His reputation as a preacher was that of a man not merely erudite and eloquent but also able to inspire young people so they might "be fitted for public service."  By his voice and arguments, but most of all by his manifest commitment to the impossible yet imperative task of aligning his own life with models of virtue that he found (mainly) in scripture, he was mentor to his student in the same way that he was pastor to his flock. In his theological writings, which were largely concerned with what we would call moral psychology,  he explored the mystery and contingency of learning, which, he believed, sometimes proceeds in steps, sometimes by leaps, sometimes by sheer surprise in the absence of exertion, sometimes by slow and arduous accretion through diligent work...  [but] the moment of electric connection between teacher and student cannot be predicated or planned.

But education merely through an electrical connection avoids the electric connection here described.  Puritan pedagogy may have (in Delbanco's words) effectively dismantled the "limits of jealous self-regard in which [the student] has hitherto been confined," but MOOCs (Massive Open Online Courses) tend to leave those limits intact.  The "mystery and contingency of learning" becomes as predictable as a playlist.  Professors like John Cotton, whose lives might have spoken alongside their lectures, are kept at manageable distance, safely streamed to 10,000 students at once.
Posted by millinerd at 1:06 AM