How to Make History 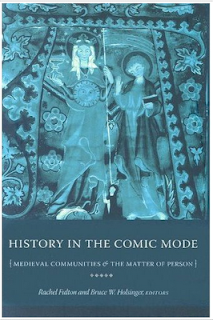 One can smell 1990s academic prose, heavily seasoned with fin de siècle despair, from three book shelves away.  I was fortunate enough to go to graduate school when this kind of academic work had curdled.  People clearly wanted something new, and yet, the ladders used to attained academic posts of influence were built with such prose, so resistance was thin and scattered. Things change fast, however, and resistance is not so scattered anymore. One can find it books like this, or in this fantastic Festschrift for historian Caroline Walker Bynum, where Bruce Holsinger and Rachel Fulton Brown put it this way:

Post-ironic history in the comic mode, among other things, involves a refusal to


smirk at the past or to wink at the reader as if to say, "But we know this can't really be true."  Instead… [it is] to recognize at least implicitly (and, we could claim, more rigorously) that a hermeneutics of suspicion must always go hand –in-hand with what Paul Ricoeur has called a hermeneutics of the sacred: a fundamental trust and investment in what’s actually there, staring us in the eye, as an inextricable part of meaning and significance…

Because of the subject matter that Bynum investigates (Jesus as mother, the dietary practices of female saints, blood piety, material devotion), Bynum always seems to be part of the fashionable turns to the marginalized and grotesque, even while she transcends fashion by refusing to do history ironically.  Holsinger and Fulton try to isolate her method.  What they cannot find is a list of "musts" or "hot topics" or "regrettable lacunae in previous work" to be redressed.  The best formula they can identify is to "start with the text - or the image, or the statue, or the piece of music.  As you study to interpret it, pay attention above all to the things that surprise you and then see how they compare with the things that you expect."  Bynum became a trend setter exactly by refusing to set trends.  She just did the work, "seek[ing] out religiously grounded answers to religious questions, intellectually grounded answers to intellectual questions."

Ultimately, this kind of straightforwardness involves a degree of risk:


The point of writing history is not...  somehow to cleanse ourselves, as it were, of the taint of the past- the humanist/Reformation/Enlightenment project of exposing the past as past and cordoning it off behind the fence of anachronism.  Rather, it is to allow ourselves still to be touched by the past....

Because Bynum claimed that "Every view of things that is not wonderful is false," Holsinger and Fulton insist that "Scholarly irony about the things that make us smile is out of place here. It is not possible to wonder ironically."  If avowedly Marxist historians (who will always be with us) are ever on the edge of ushering their students to a protest march, then medieval historians in the school of Bynum, regardless of their faith commitments, seem ever on the edge of having their students pray, or at least imagining what it'd be like to do so.

But my colleague Tiffany Kriner has some pointed remarks in this respect.  In an article entitled Our turn now?, she ratchets up the aforementioned risk even higher, letting it get dangerously close to our carefully curated career trajectories.  She turns Girardian theory not on literary material, but on scholars themselves:  "Perhaps in light of Girard's understanding of Christ's nonviolent, nonsacrificial, nonrivaling love, Christians in literary [or, we could add, historical] study ought to give up the mimetic competition, or perhaps, turn from claiming the territory of 'the turn' toward something else."  Kriner argues for the most novel turn of all, a "turn from the trap of acquisitive mimesis in academic cultures."

Unless they straight up quit, however, Christians (of which I am one) still have to inhabit the academy.  Is it possible to do so while still taking up Kriner's challenge?  Perhaps so.  Even though none of us - individually or institutionally - will do it perfectly, the famous second century Letter to Diognetus affords an answer.  Here is an excerpt, with some translation tweaks of my own to accommodate the academic life:


For Christians are not distinguished from the rest of academia by country, language, or custom. For nowhere do they use methodologies of their own... nor do they practice an eccentric lifestyle.... But while they live in both Christian and secular universities, as each one’s lot was cast, and follow the local customs in dress and food and other aspects of life, at the same time they demonstrate the remarkable and admittedly unusual character of their own citizenship. They live in their own colleges, but only as aliens; they participate in everything as citizens, and endure everything as foreigners...  They are dishonored, yet they are glorified in their dishonor; they are slandered, yet they are vindicated. They are cursed, yet they bless; they are insulted, yet they offer respect...  In a word, what the soul is in a body, this the Christian is in the University.

Again, an impossible standard, but one worth advancing nonetheless.  That last sentence, it seems to me, even offers a reply to Marsden's well known book.  As Christians, it's too easy to overplay our distinction.  So long as guild standards are not gummed up with anti-religious prejudice (as they still sometimes are), we need those standards as much as anyone.  It may then be time, like Bynum, to simply do the work, to (in the case of historians) make history, while reneging the mimetic pressure that so frequently bedevils academic labor.   At the conclusion to his follow up to The Scandal of the Evangelical Mind, Mark Noll argues that a besetting temptation for Christian scholars is to talk about how to engage the academy instead of actually doing it, like officials at a track meet perpetually calling the competitors to the starting line.  But the 90s are over, and the methodological openness of scholars like Bynum, Fulton and Holsinger gives us no excuse not to run.
Posted by millinerd at 11:01 PM