Sex and the Annunciation 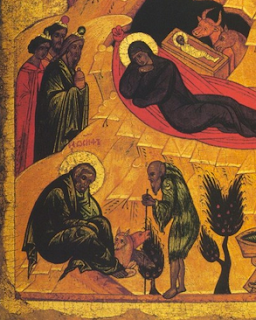 I'm a little late for the feast of the Annunciation, but shall hold forth regardless as contemporary reflection on the conception of the Second Person of the Trinity in the womb of Mary frequently suffers from a lack of theological imagination. Early feminists, for example, denounced the Annunciation as rape; but have been thoroughly trounced on this point by contemporary feminists (Fiorenza, Beattie, Boss, Kearns, Fulton, et. alia.). Others have inflexibly assumed the Annunciation to have been something like normal sex, forgetting (if they ever knew) that the tradition, Luther and Calvin included, has regarded the virginity of Mary before, during, and after the conception and birth of Christ as axiomatic (hence the traditional three stars on Mary's robe). If the incarnation had approximated actual sex, the Holy Spirit - who of course is beyond male and female - would have needed to make use of Joseph. But Joseph was, as we know, left out, which perhaps helps explain his grim face in Byzantine depictions of the nativity.

Justin Martyr expresses the normative Christian claim: "[The Holy Spirit] came upon the virgin and overshadowed her, caused her to conceive, not by intercourse, but by power." Feminist theologian Tina Beattie encapsulates how this turned patriarchal paganism on its head:


Christianity thus achieves a double inversion of the pagan relationship between divinity and motherhood. It excludes the sex act which features in mythological couplings between women and the gods, but it also insists that a fully human mother gives birth to a fully human [G]od. The incarnation is therefore more supernatural and more natural than the human epiphanies of the pagan gods.

Sex, of course, can be holy, which is why Augustine came around to admitting it to have been a supralapsarian, lustless enterprise. Still, we shouldn't think of the Annunciation as somehow reflective of sex as we know it, but we should think sex, at its most chaste, to be a distant reflection of the Annunciation. We should not exclude sexual metaphors when thinking of this even as much as we should transcend them. According to Raymond Brown, the Annunciation in the gospel of Luke "is not quasi-sexual as if God takes the place of a male principle in mating with Mary. There is more of a connotation of creativity... Mary is a virgin who has not known man, and therefore the child is totally God's work - a new creation" (314). Early Christians imagined the moment of Christ's conception in many ways, it occurring through Mary's ear in some cases, her eyes in others, sometimes directly to her womb. Far from being gnostic refusals to fully embrace the body, these early accounts are right - all of them. What's more, they need to be fused together in a full-bodied understanding of union that fulfills and transcends sexual encounters as we know them. In his famous sermon on Mary's presentation in the temple, Gregory Palamas gets at the boggling immediacy of the event:


The Archangel was not foretelling the future by saying "The Lord is with thee", but was declaring what he saw happening invisibly at that time.... It was not an Angel that was to overshadow her, nor an Archangel, nor even the Cherubim and Seraphim, but the power of the Most High in Person. And what is more, the power of the Highest did not converse with her through a whirlwind and cloud, nor through darkness and fire, nor through a gentle breeze, as happened occasionally to others who were deemed worthy, but it directly overshadowed her virgin womb without any kind of disguise. There was nothing between the One overshadowing and the one overshadowed, not air, either earthly or heavenly, nor anything perceptible or beyond our perception. Obviously this was union, not overshadowing.

Like Joseph, I wasn't there. But my hunch is that no human sexual activity, however appropriate and pleasurable, could come close to equaling the impossibly chaste union of the Annunciation. Hence, the celibate who do not have sex are just as close - perhaps even closer - to fathoming the experience of the Virgin Mary. To review, the Annunciation does not approximate sex, sex - at its absolute best - approximates the Annunciation. And will always fall short.
Posted by millinerd at 10:19 AM