Having acquired some respect for Italian cinema thanks to Gabriele Salvatores' Happy Family, a lighthearted (and inescapably theological) meditation on authorial creation that ran circles around bloated American attempts at the same such as The Truman Show; and having recently shared an Alitalia flight with Tilda Swinton, I was spurred to don beret and summer scarf and march downtown to the Princeton arthouse with Denise, my wife partner, to see Luca Guadagnino's Italian film, Io sono l'amore (I Am Love), starring my plane friend Tilda (there was only a thin first class curtain between us).

"With its close-ups of gorgeous cooking, 'I Am Love' could easily be categorized as a foodie movie," writes The New York Times. The statement is admittedly qualified, but still, this is like suggesting that those interested in a carefree vacation in Japan might benefit from watching Hiroshima.  Such soft commentary calls for some aggressive counter-interpretation, so here goes: I Am Love is "Sinners in the Hands of an Angry God" in arthouse clothing.  If the theater had pillars, we'd have been clinging.  The film's "prawnographic" scene has generated some buzz, where the chef with whom Tilda will soon have an affair makes her an exquisite dish of prawns. How odd to watch the white witch of Narnia, who offered Turkish delight to Edmund, consume her own fruit of the knowledge of good and evil, to equally devastating effect. 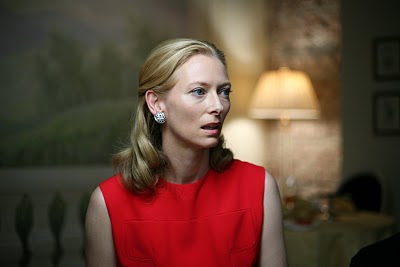 This is not a film about "repression and breaking free" as wikipedia tells us (despite my futile attempt to add some nuance to the entry).  I Am Love is instead a critique of what R.R. Reno calls the Empire of Desire, not a call (like every other film) to submit to imperial demands.   Sometime in the Middle Ages, I imagine an enterprising cleric may have conceived of a sin prevention machine, in which individuals could be placed to convince them not to steal or murder. It took the technology of film to be actualized, but the anti-adultery machine has been perfected, and its name is I Am Love.  Be ye warned, the film contains some borderline pornography (in addition to prawnography), the redemptive factor being its inescapable (and perhaps intentional) ugliness. Insects pollinating flowers are spliced into one particular bout of outdoor copulation, which is not - as some might assume - an endorsement of the "naturalness" of this affair, but a mockery of humans who act like insects.

Tilda Swinton's character was reduced by the film's events (which I shall not here reveal) to a human skeleton, one that she played consummately well.  Swinton seems to be able to manage non-traditional relationships in her own life more successfully than her character did; but no matter - art, in this case, trumps life. Whereas the American Cougar Town takes affairs of older women with younger men to be a comedic setup, I Am Love employs same scenario to traumatize its sophisticated audience into respect for traditional sexual mores. We can sermonize about the deleterious social effects of Cougar Town all we want (and to little effect), but just as the only answer to The Wrestler is the parallel story of a similar man's redemption on offer in Crazy Heart, so the only proper answer to Cougar Town is a film that shows the real consequences of the same behavior, absent the laugh tracks.

Still, I Am Love offers no solution, just an instructive vacuum.  [The closing cave scene is not "resolution," by the way, but Canto V.] As the credits rolled, following ten or so minutes of silence the likes of which I haven't navigated since Requiem for a Dream, I cast off my beret and summer scarf, and asked Denise, my partner wife, "Where do I get my soul back?" Interestingly, she had a ready answer: By reading Tony Woodlief's memoir Somewhere More Holy. America may have given us Cougar Town silliness, but it gave us a Woodlief family as well, who navigated the same tragedies related by I Am Love with the help of a God who really is.
Posted by millinerd at 9:38 AM