The Architecture as Icon exhibit, which was first in Thessaloniki, is now at the Princeton University Art Museum through June 6.  I have a write-up in the Spring 2010 PU Museum Magazine on the relation of the exhibit to Jonathan Edwards.  Sub-division of American Protestantism get acutely possessive about Edwards, but as I've suggested before, his thought constitutes a sort of New World Patristics, containing most permutations of American Christianity in ovo.  It is not, therefore, surprising that the Orthodox/Byzantine dimension fits nicely with Edwards well. Here's the piece: 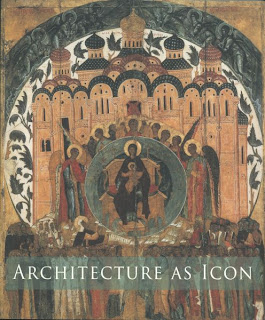 On first thought, what imaginable connection could there be between the Calvinist history of the College of New Jersey (which became Princeton University in 1896), and an exhibit on the Byzantine architecture as icon?  The mixture of Revivalist sentiment and Reformed doctrine that resulted in a new colonial college in 1746 left little room for an iconic, cosmic, Byzantine worldview, and still less for images and architecture that hoped to mediate that reality.   The Presbyterian accent on the commandment to “make no graven image,” meant that Reformed thought – which would continue with vigor in Princeton with the founding of Princeton Theological Seminary in 1812 – was anything but Byzantine.

A closer look, however, shows that there are important strands within the thought of Jonathan Edwards, arguably Princeton’s most famous philosopher, theologian and president, that nicely dovetail with this exhibition.  Byzantine theology involves a analogical perspective that encompasses both the beauty of the physical world and the history of salvation – a view best encapsulated by the carefully schematized decorative program of the Byzantine church.  Likewise, Jonathan Edwards was preeminently a theologian of beauty, and his notes collected in Images of Divine Things display a typological exploration of the physical world, a world understood to be an icon of the character of God.

Edwards, upon accepting his position as President of the College of New Jersey in 1757, had planned a magnum opus, which might have fused both the history of Redemption and his iconic perspective on nature into a system that would crown his already prodigious output.  But his untimely death, only six weeks after his arrival in Princeton, meant this cosmic project would go unfinished; nor could such a vision be fulfilled by the less imaginative Presbyterian minds took Edwards’ place.  Still, seeing how well the iconic aspirations of Byzantine architecture embody the late Edwards’ perspective, the current exhibition can perhaps be considered a partial fulfillment of his ambition.   At the very least we can imagine that Edwards, whose body lies buried just a few blocks away, would be intrigued.

At any rate, behold the impressive catalog from wherever you are, and if you're nearby, be sure to visit the exhibition itself.  If the latter, pay special attention to that creepy disembodied voice...  or else.
Posted by millinerd at 12:15 PM