Why the Picture of Florence Above?

A friend has requested that I post my full review of New York's latest show on icons, The Origins of El Greco, which is a bit longer than the New Criterion version.  Who am I to deny this friend?  The full review might shed some light on the photograph above, taken in 2009, where I saw a saw a menacing raincloud that read "millinerd.com" raining on Giorgio Vasari's Florentine parade: 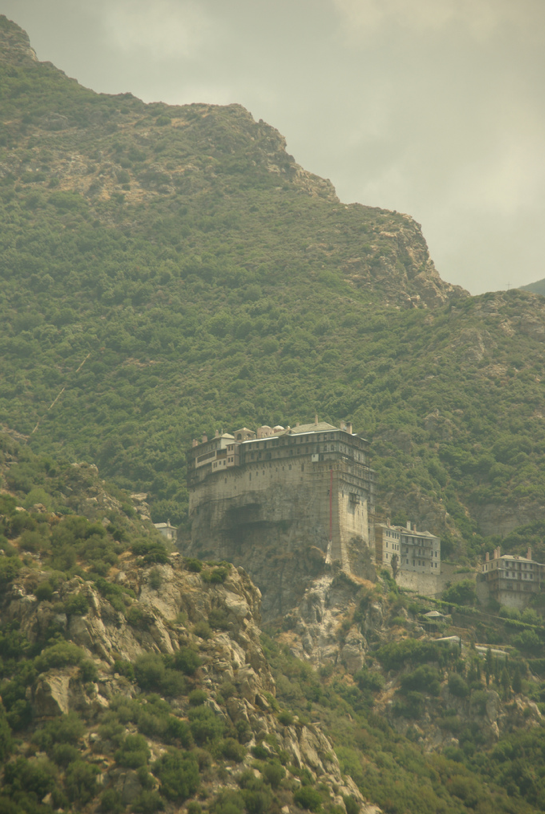 “Do you know what you’re looking at?”  The monk’s question, spiked with condescension, annoyed New York Times review, I looked with frustration as gallery visitors attempted to wring aesthetic messages from these irreducibly religious images.  Against my better judgment, a question stirred within me, silently directed at a gallery of innocent art-lovers:  “Do you know what you’re looking at?”
me.  I had endured the expense and bureaucratic hassle to secure entry to Mount Athos, and I, so I thought, knew exactly what I was looking at.  It was a fresco in the portico of the Great Lavra Monastery depicting the Seventh Ecumenical Council (at which the veneration of icons was vindicated), and I fired this information back to the inquiring monk.  He was unimpressed.  Years later, visiting the current exhibition at the Onassis Center, an exquisite assembly of post-Byzantine icons, I sympathized with the monk.  Standing amidst a gaggle of admirers drawn by the validation of a favorable

It is a legitimate query, because when viewing icons, we educated viewers rarely do.  The problem is not our lack of education, but the nature of the one most of us received.  Giorgio Vasari, the father of art history, was right about many things.  But he began his Lives of the Artists by slaughtering a sacrificial lamb, the “incompetent…  crude, stiff, and mediocre…  dead tradition of the Greeks.”  Which is to say, the very aesthetic insemination that gave us the Renaissance was, for Vasari, blank sterility.  We know better now, and need no longer indulge Italian ex nihilo fantasies. In the last several decades, Byzantine art historians have permanently altered our understanding of neglected Eastern contributions to Italian art. To say this is not to denigrate undeniable Tuscan accomplishments, but only to contextualize them.  Recently studied Byzantine frescoes and the discovery of icons at St. Catherine’s Monastery show that Byzantine painters in fact anticipated Cimabue and Giotto’s innovations centuries beforehand; but historical circumstances permitted these images little chance to condition the late-blooming discipline of art history, an opportunity which fell instead to Vasari.  Hence, his primordial murder of the icon festers beneath this most enchanting of disciplines, and Byzantine blood, like the blood of Abel, repeatedly cries out from the art historical ground.

New York City has not been completely deaf to the sound.  In 1944, the Metropolitan Museum of Art was surprised by the popularity of a show displaying copies of the mosaics of Hagia Sophia, one of which still quietly overlooks the medieval sculpture gallery.  Since, the museum has been periodically clothed itself in Byzantine splendor:  The Age of Spirituality (1977), The Glory of Byzantium (1997) and Byzantium: Faith and Power (2004).  Sensitive to the religious nature of these items, the opening of the latter even featured the blessing of an Orthodox priest, incense and all.  But what makes this next tryst in New York’s Byzantine affair so unique is its chronology.   Most previous shows have, generally speaking, cauterized the Byzantine aesthetic with the end of the Empire in 1453.  But The Origins of El Greco:  Icon Painting in Venetian Crete bursts these academic bonds – the Vasarian vise grips - entirely.  1453 may have marked the end of the Byzantine political power, but it was a new beginning for the icon.  Recent research in Venetian archives has revealed how thousands of icons were pumped into Western territories from Crete, pouring into Venice at the height of the Renaissance, flooding into Florence under Vasari’s very nose.  The icon, we now know, never disappeared; it was ignored.

Some of the best of these icons are located in Heraklion, Athens, St. Petersburg, and Corfu, whose museums have generously ensured this exhibition contains some of the finest and most representative examples of such imagery.  As art objects from American museums hasten, by threat of lawsuit, back to Europe, it is assuring to see the temporary reverse, thanks to magnanimous loans extended to this particular exhibition.  There are far too many surprises here to relate, but each shows the persistence of the icon in an age when it was supposed to have gone away:  Andreas Pavias’ crucifixion gives Northern Renaissance detailing a run for its money; Georgios Klontzas’ illustration of a Marian Hymn rivals the torque of the Baroque; a snowball of souls swells in the hand of God above an icon of David and Solomon; Arius, the fourth century heretic who confined the divine nature of Christ, is himself confined in Michael Damaskinos’ icon of the Council of Nicea; what may be a long dispersed triptych of El Greco’s is here reunited for the first time.

Some of the most sumptuous holes in the history of art are on offer in this exhibition.  In a sixteenth century Virgin of the Passion, scuffs have afflicted the simple wood surface, clustering to create gold-flecked craters that no artist, however inspired, could have conceived.  In a fifteenth century Noli me tangere, these wounds of time appear again, like benign gunshots in the resurrected body of Christ.  We rehearse the evolution from wood to canvas and from tempera to oil, and for good reason.  But the icons on display here show us what was lost in the transition.  Canvas cannot age the way these wooden panels have.  As with wine, so with icons:  Far sweeter now than at the hour of inception.

Holes are one thing, lines another, and it is the linear quality of the late Byzantine and Cretan icons that give them their tender severity, and one can trace the gradual loss of this arresting linearity in the show.   Again, we weren’t supposed to think this.  The exhibition itself refers to how one Cretan artist “distance[s] himself from the rigidity of the Byzantine style.”  On the contrary, we might suggest he succumbs to Venetian softness.  Compare the two Virgin Lactans in the exhibition  - the intentionally juxtaposed Eastern and Venetian styles – and see for yourself which of them contains more power.  The Venetian Mary hints at San Sulpician sentimentality; the Eastern Mary, bare breast notwithstanding, is still the Theotokos, the all-holy bearer of God.  But not for long.  As Italian prints saturated the Mediterranean, late icon painters were hypnotized by Bronzino and Parmigianino, and many could not help but yield.  Thanks to the Metropolitan Museum of Art's Bronzino exhibition, one can walk uptown in the same day to fathom this appeal.

And what of El Greco?  He is not the point of the show as much as the bait.  A similar strategy was employed this season with the opening of the spacious post-Byzantine wing of the Byzantine and Christian Museum of Athens.  A temporary, and not terribly impressive, Andy Warhol exhibit was displayed in conjunction with a very impressive collection of later icons, simply because recognizable names are the only way to lure a population conditioned by art history inside.  If you want full blown Spanish era El Greco head to the Met or the Frick, but at the Onassis Center one can currently see something arguably better:  Where he came from, and where – towards the end of his life – he returned.  Here is the El Greco who complained, in the margins of his copy of Lives of the Artists, that Vasari (and generations of art historians after him) misunderstood the Byzantine style.  Only here can we see how El Greco’s whirling western skies were persistently haunted by golden ones, just as art history is haunted by her hidden foundation:  The icon, her Byzantine ghost.
Posted by millinerd at 11:36 AM