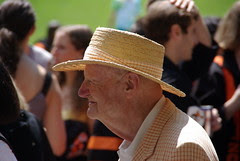 Old Guard
Originally uploaded by millinerd
To critique my own generation - not idolize another - I'll post this photograph from Princeton reunions this weekend along with a pertinent quotation from Kevin DeYoung's book, Just Do Something.

"Compared with my affluent, lazy, trivial, tinkering generation, my grandpa would be a remarkable man, except that so many from his generation seem to have been so remarkable. He had his faults, to be sure, but Grandpa Van, like most of the WWII crowd, certainly did something rather than nothing. He worked hard, took chances, showed constant initiative, and, by his own account, lived a pretty fulfilled life - all without searching desperately for fulfillment. He prayed, but didn't hyper-spiritualize his every move. He had several different jobs, but never in hopes of finding the next best thing.

More importantly, growing up in the Depression, he expected little from life, so when he got little he wasn't surprised, and when he got a lot, he chalked it up to God's doing, not his. I sense from talking to my grandpa that he labored hard at everything except trying to discern some mysterious, hidden will of direction from God. Not that he doesn't believe in God's providence. Far from it. But the providence he believed helped him take chances instead of taking breaks."

Much of DeYoung's effectiveness comes from his going to an older generation for wisdom, not his own.
Posted by millinerd at 7:59 PM