The End of Generation X 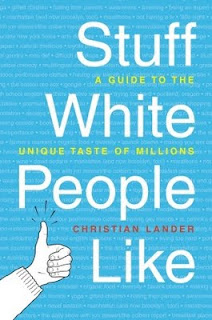 Is it time to stop discussing the absurdly popular blog Stuff White People Like? Not just yet. The book perfects and expands Christian Lander's satirical achievement considerably, justifying a closer look and providing an Indian Summer to Lander's success. The book's subtitle, "The definitive guide to the unique taste of millions," explains its power: Lander exposes how what many think is their unique, ineffable taste in artisan breads, Wes Anderson movies and Arcade Fire is not only instantly identifiable, but has the mass appeal of Nascar. Stuff White People Like, as Bobos in Paradise before it, has defined not a race but a demographic; and by defining it, has exposed one massive pretension: We white people thought we had escaped demographics.As most know, the book reads like an anthropological field guide that would enable an outsider to befriend and win favors from "white people," that is, 20-30 something upper middle-class left-leaning North Americans probably educated at small liberal arts colleges. Because, according to Lander, "white people need authenticity like they need oxygen," it can be difficult to watch one's carefully cultivated identity exposed in these pages as utterly commonplace (consider, for example, the quote under "disclaimers" on the lower left sidebar on this blog).

As the white tide of satire encroaches upon one's lifestyle choices, the reader keeps retreating, seeking higher ground to secure some kind of uniqueness. But, as so many have learned, there's no escape. The fact that someone can so easily identify our "uniqueness" exposes our sameness. It can sting a bit, but overall, it's funny. Lander's severest critique, however, is reserved for liberal pieties; and in puncturing them, Stuff White People Like operates like a conservative Trojan horse.

Consider #18, simply entitled Awareness. White people "firmly believe all the world's problems can be solved through 'awareness' - meaning the process of making other people aware of problems, magically causing someone else, like the government, to fix it." #62 is Knowing What's Best for Poor People. White people believe that "if given money and education, all poor people would be exactly like them." When talking to a white person, "It is essential that you make it clear that poor people do not make decisions based on free will." New in the book is #112, Free Health Care: White people love it, "at least until they have to wait in line for an MRI. This is very similar to the way that white people express their support for public school when they don't have children." #57 concerns Michael Moore, "the film-maker who has produced a body of work responsible for reaffirming things that white people already believe in... Perhaps you noticed the increase in health-care policy scholars in 2007, or American foreign-policy experts in 2004, or gun-control pundits in 2002." #98 is Noam Chomsky: "If it were possible to dole out white sainthood..." Could the Russell Kirk Reader do it better?

Lander is emboldened to takes steps in the book that he didn't venture on the blog. Consider #118 on the ACLU:


Perhaps one of the most universal things on this list is white people's love of the ACLU and its actions. And why not? It incorporates so many things white people love: lawyers, religions their parents don't belong to, knowing what's best for poor people, non-profit organizations, and expensive sandwiches. (The last point is not confirmed, but it's a pretty safe bet to say that there is nothing ACLU lawyers like more than removing the Ten Commandments from public places and then digging into a nice panino).

The book ridicules fear of the big business boogeyman. White people hate corporations (#82), granted these are not Apple, Target, IKEA or Whole Foods, all companies which make stuff they like. Anti-corporate books like No Logo are poked fun at for their belief that we live in a "Matrix-style manufactured universe," to which a subscription to Adbusters is the liberating red pill.

Why not a few more? "Though he would likely hate them all, white people cannot get enough of Che Guevara" (#113). "If you ever mention Fox News you will have lost respect and credibility to such a high degree that you might have to move" (#115). "Public Radio provides white people with news and information that has the proper perspective (their own)" (#44). A white person becoming a professor involves "moving to a small town, and telling the local residents how they are awful and uncultured" (#81). And here is the shortest entry in its entirety: "White people like Barack Obama because they are afraid that if they don't they will be considered racist" (#8). One can see how for some, polite I-can-laugh-at-myself chuckles might, at this point, be running thin.

A few items on Lander's list take us into more serious territory. A corollary of white people hating their parents (#17) is their love for religions their parents don't belong to, for white people "will believe in any religion that doesn't involve Jesus" (#2). Furthermore, "Whole Foods stores have replaced churches and cathedrals as the most important and relevant buildings in [white] society" (#48). Finally, some who purchased the book for comic relief may not find much of it in #96:


If you encounter a white person who is trying to produce a child in their late thirties and is having some difficulty, it is very important that you never mention that it might be due to their trying to have children so late in life.

Like a good band that gets too popular, Christian Lander's success makes it easy to underestimate the importance of his accomplishment. Not only has Lander written some clever satire, but he's given a potent explanation as to why so many of us - despite it being exceedingly unfashionable - become more conservative. (He also inadvertently provides the definitive guide to the Emergent Church.) Beyond that, Lander so effectively demolishes our attempts at uniqueness that his book could legitimately be called the end of Generation X. In other words, we've all been found out.

It does not take a lot of imagination to conceive what an answer to Lander's satire might look like. There is, therefore, an escape. To find the high ground, select key items from his list and imagine the reverse. Understand that business, even big business, can be but is not necessarily bad. Have children, stay married, learn more about economics, be more sincere than ironic. Despise not the specter of Lander's book - "the wrong kind of white person" - i.e. the ones at Sam's Club. Know that it's as pathologically weird to hate one's country as it is to hate one's parents. Above all, take traditional faith seriously. White people, as defined by Christian Lander, don't like any of that stuff, and there's the (sort of) good news: Stuff White People Like makes being a conservative religious believer in the 21st century genuinely unique.
Posted by millinerd at 4:05 PM