There have been some beautiful reflections on the passing of Brett Foster this week. I have been asked to share the remarks I made at his funeral on Saturday. Here they are:

When I first came to Wheaton as a professor, I found myself in Chicago at a Poetry Foundation event. As the snow gently fell outside the postmodern architecture, a poet took the stage and recited beautiful, nearly hypnotic verses about his loss of Christian faith. If there were Christian students in the room (and there were), they might have concluded that there was no place for serious faith in the world of high poetry.

And then the next reader took the stage. Brett gave an equally sophisticated, equally beautiful reading of his own work, poems that of course were not about the loss of Christian faith, but which were gently and subtly infused with it. Whereas the first poet had described how a romantic escapade had drawn him away from Jesus, Brett concluded his reading by proudly gesturing to his wife Anise, son Gus and daughter Avery who had come into town to support him. The upshot is that if those same Christian  students stuck around (and they did), they could conclude that the world of high poetry was exactly the place where a Christian needed to be.

I had thought the contrast of the two readings might be due to some kind of rivalry, but I quickly learned that Brett was friends with the poet who had read before. This is not surprising as Brett was friends with everyone, and was just then beginning to weave me into his ever-expanding circle. I bought his book that afternoon, and he inscribed it: 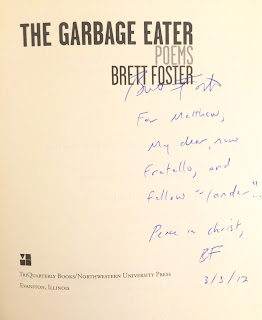 "Lander" is Brett's code for anyone who would join him on countless ventures to go to land at a coffee shop to get some work done (which never got done). There were lots of those trips, and I don't regret a one of them. But the word that strikes me most now is fratello. As ever with Brett, it was the perfect choice. Italian for brother, it conveys that notion, but also evokes a brother in a religious order. It can feel that Wheaton professors - men and women both - are in something of a bizarre religious order; and if so, it feels this week like we lost our Abbot.

At any rate, that's what I said, and there is so much more to say. Who could adequately describe the extraordinary celebration of his poetry that occurred in Arena Theatre the very hour that he died? Suffice it to say here I've never wept so much, but also have never been so filled with the hope of the resurrection in the wake of these events - including the death of Roger Lundin within the same week. For the first time (in my life at least), it feels more, not less rational, to believe in the resurrection hope so wonderfully expressed in Scott Cairns' poem read at the funeral (cited by Alan here), and also in the word play at the end of Jeffrey Galbraith's elegy for Brett, which astutely expresses both the loss of an expired body and the hope of a new one at once:

and rise to circle the fields leaping,

Posted by millinerd at 4:29 PM