A student walks into my office and asks "What is beauty?"  I reached for Roger Scruton, but better perhaps to have reached for John Ruskin's Modern Painters.


[Beauty] is either the record of conscience, printed in things external, or it is a symbolizing of Divine attributes in matter, or it is the felicity of living things, or the perfect fulfillment of their duties and functions.  In all cases it is something Divine, either the approving voice of God, the glorious symbol of him, the evidence of his kind presence, or the obedience to his will by him induced and supported (MP 2:378). 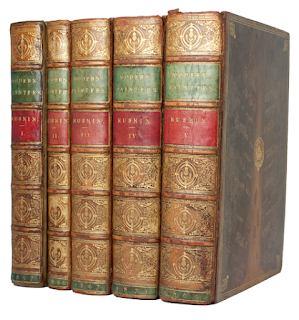 The typical objection to such exalted, theological takes on beauty is that they (presumably) neglect justice, and this critique has legitimate targets.  "Whatever the surrounding evil, for the artist the sun is always at the zenith," wrote the abolitionist Unitarian minister Moncure Conway.  "The reformer's zeal, much less his discontent, admirable elsewhere, is inconsistent with the repose of the spirit which wins beauty to the side of the artist."  So much for artistic justice.

But Ruskin was different, and to think his aesthetic ambitious were out of touch with the spirit of reform requires no knowledge of his writings whatsoever.  On the contrary, it was just this Ruskinian take on beauty that was used to attack frivolity.  As the unjustly forgotten Yale art historian and minister James Mason Hoppin put it.

Since [Ruskin’s] prophetic voice has been heard art has risen from its degraded position as the slave of luxury, as a bourgeois conventionality, as a mere decoration of life however brilliant, and its true nature is seen that it has a vital and eternal beauty belonging to divine things (The Early Renaissance, p. iv.)

Yes, this scrambles tired dichotomies.  Phil Ochs' admirable suggestion that "protest is your diamond duty...  ah, but in such an ugly time the true protest is beauty," is not some wisp of 60's inspiration, but a return to indigenous American Protestant aesthetic theory (whether Ochs realized this or not), and boy do we need it now.  American art history, fortunately, is far more deeply rooted in the other bearded London economic theorist than in that Jewish prophet who lost religion (to borrow Mackay's formulation), Karl Marx.  But don't tell that to anyone who cherishes the myth that things only got serious with Meyer Schapiro.
Posted by millinerd at 11:41 AM