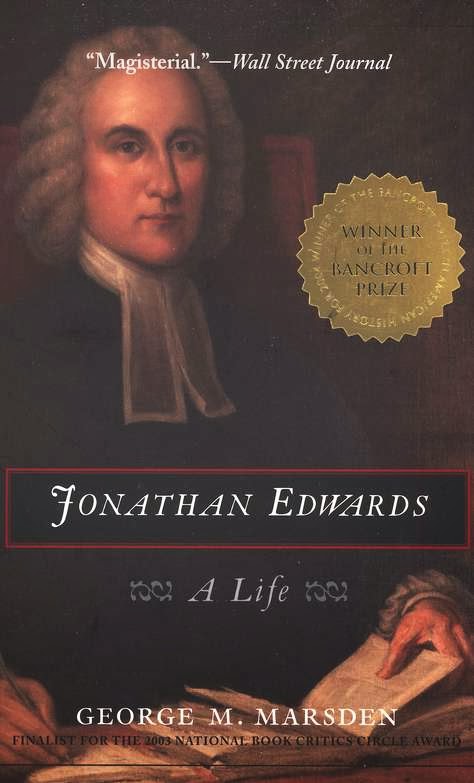 Funny thing about the Princeton Plato, Jonathan Edwards, is how he transcends all later American denominational stereotypes. He promotes revival like the most enthusiastic Charismatic, accommodates secular learning like the most worldly Episcopalian, preaches hellfire like the stoutest Baptist, celebrates beauty like an Orthodox iconographer, subscribes to sovereignty like an uncompromising Presbyterian, and practices personal piety like the most earnest of Methodists. Best of all, he typologizes like a Catholic, and the way he uses nature to extrapolate about the character of God makes him thoroughly guilty of the (Christologically grounded) analogia entis. Edwards is, as Perry Miller put it, a Puritan Saint.

In his introduction to one of George Marsden's underestimated Stone Lectures on Edwards last year, the perceptive and unassuming Steve Crocco wryly asked the unanswerable: Why did God allow Jonathan Edwards to die at the peak of his intellectual powers? While his collected works fill 26 volumes, a longer life might have enabled him to complete his projected magnum opus on the history, and ontology, of salvation. But instead, Princeton's Plato died, and as mentioned, Witherspoon's Aristotelian Realism took over, which, of course, also has its strengths.

However troubling that question may be, at least it didn't bother Jonathan Edwards. Here's Marsden on this most untimely death:


Almost all his life [Edwards] had been preparing for this moment. He had often preached to others about how they should be ready for death and righteous judgment at any minute, and he disciplined himself with a regimen of devotion so that he would be prepared. In the weeks when he was wasting away he must have wondered why God would take him when he had so much to do. But submission to the mysteries of God's love beyond human understanding was at the heart of his theology. When he knew the end was near, he dictated a message to be sent to Sarah in Stockbridge, to "give the kindest love to my dear wife, and tell her, that the uncommon union, which has so long subsisted between us, has been of such a nature, as I trust is spiritual, and therefore will continue forever."

Later American denominations have divided up the Edwards patrimony like so much cake, each content with a portion, some satisfied with the cellophane container, some getting excited enough about a corner piece with extra frosting to think they have it all. The downside to this is that few there are who think as largely as Edwards did; the upside is that not only the ultra Reformed get to claim him.
Posted by millinerd at 6:16 AM