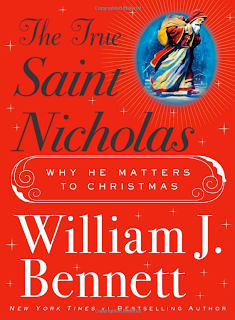 It is sad to see the American Santa Claus making more headway in the thick Saint Nicholas country of the Orthodox Mediterranean. As William Bennett explains so nicely, the American figure was spurred by the historical explorations of the famous New Yorker John Pintard, furthered by Washington Irving, crystallized by Hebrew Professor Clement Moore's Night Before Christmas, given visual form by the cartoonist Thomas Nast, and propagated through the avenues of a burgeoning consumer society. It's a relatively thin, late-arriving tradition, and one can understand the desire to protest it completely. But a better recourse is to return to St. Nicholas himself (the St. Nick Center sure helps a lot). The answer is not to Americanize the Orthodox, but to allow the Orthodox tradition to make headway into American life.

One would not suspect a mass market American book to do that, but William Bennett's The True Saint Nicholas does so by nicely distilling an extraordinary amount of historical information. Bennett points out that the very thing so many Protestants worry about in Santa is a result of too cavalier an amendment of centuries of Christian culture by Protestants. Santa Claus, in his various guises, is a revenge on the unfortunate excesses of the Reformation.


Reformers tried to discourage the lighting of candles, exchanging of gifts, and distribution of sweets to children on St. Nicholas Day. By the end of the sixteenth century, Nicholas had been banished from religious life in much of Western Europe. But he could not be driven out of people's hearts and imaginations. He was much too beloved for that to happen. When Saint Nicholas lost his honored place in churches, something extraordinary happened. He moved into homes, where he had legions of fans, especially among children. He became a hero of the hearth.

Bennett also cleverly points out that Americans do not have a corner on consumerism:


Yes, Santa Claus is sometimes overexposed and exploited. But anything good is open to being exploited. In fact, anything good is likely to be exploited. Such is human nature. Saint Nicholas, in his heyday, was arguably just as overused and overexposed as Santa Claus is today. People called upon him to fulfill every conceivable desire, from finding a husband to conquering an enemy. The citizens of Bari went so far as to steal his bones to give their city a boost. For that matter, Saint Nicholas was well connected with commerce and materialism long before Santa Claus came along. Many a ship captain prayed to Nicholas for a profitable voyage, many a merchant invoked his name in sealing a lucrative deal. Trade guilds appropriated him in hopes of selling more buttons, barrels, and boots.

Then there's Bennett's basic cultural intuition which should be so much more common than it is: "Santa Claus is, in a very real sense, the result of a Christ-inspired goodness that has rippled down seventeen centuries, from Nicholas' time to our own. Despite secularization and commercialization, Santa Claus is a manifestation of Nicholas's decision to give to others. The history of Saint Nicholas is a kind of miracle in itself. It is a legacy that resonates with God's love."

Behind Santa Claus is Saint Nicholas, and behind Saint Nicholas is the Christ whom he defended, suffered for, and in whose name he gave gifts. Hermit crab Christians who protest Christian culture should realize they never escape culture. They just get a very bland one.
Posted by millinerd at 2:22 PM